News Category
The estimated number of visitors that undertook some form of mountain biking in Tasmania rose from 8,825 in 2014 to 13,196 in 2015 according to the latest release of data in the Tasmanian Visitor Survey. These numbers need to be interpreted with a lot of caution given the sample size (which is around 9000 people per year).

The total visitor estimates show around 1.15 million visitors a year came to Tasmania in 2015, so this would indicate just over 100 out of the 9000 respondents said they undertook some form of mountain biking in the exit survey and so there is a lot of potential for sampling error in these small numbers.

Based on a liner interpretation of the confidence interval information provided by the TVS, it would appear that we could say with 95% certainty that the numbers have increased from between 7,740 to 9,910 in 2014 to 12,497 to 13,895 in 2015 which is still a statistically significant increase.

Mountain Biking still remains as one of the least reported activities undertaken at 1.1% of respondents, ranking just ahead of flying in a light aircraft (0.9%) and scuba diving (0.3%).  Total cycling and mountain biking was reported as 31,794 people of 2.8% of visitors.  This is just ahead of those who take a train journey (2.6%) and golf (2.1%).  By comparison 41.3% reporting undertaking a bushwalk.

Like you, I can't fathom why these people don't get on a bike.

As this is the full year data for 2015, I thought I'd have a look at the breakdown by State of origin and purpose of journey, and you can see the graphs for these statistics below.

The majority of respondents that reported their state of origin came from Victoria (33%), followed by Queensland (16%) and NSW (9%).  The only state which appeared to have a significant difference between their proportion of total visitors and visitors that undertook some form of mountain biking was NSW which constituted 23% of total visitors, but only 9% of those that reported undertaking mountain biking.  This could however simply be because they didn't report their state of origin (35%). 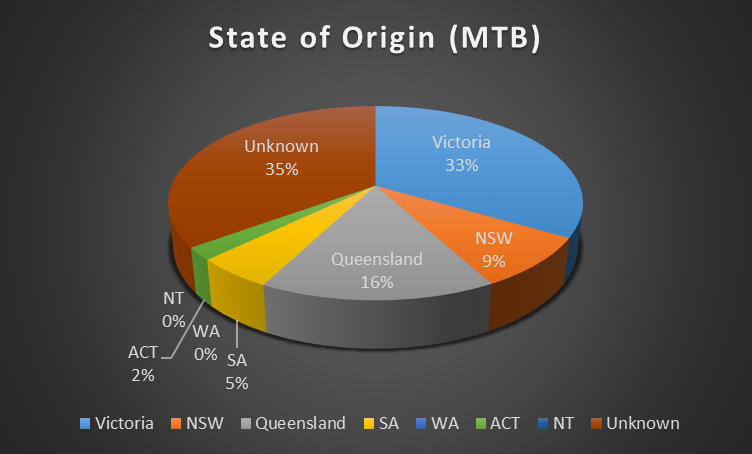 The 'purpose of visit' statistics were also really interesting with 17% of those reporting having undertaken some form of mountain biking also noting that their main purpose of their visit was for business purposes, a further 18% were here to visit friends and family and 4% other.  So only 61% of people who undertook mountain biking noted that their primary reason for the visit was for holiday and leisure.  This brings me back to my old bug-bear that we have no statistics or understanding of how many people are being motivated to visit Tasmania, in whole or in part, because of our mountain biking areas.  I see this as a really big gap in our knowledge and it is something I hope will be addressed in the draft Cycle Tourism Strategy when it is released this year.

Unfortunately, as good as the TVS dataset is, it doesn't allow us to drill down much further into mountain biking activities (probably due to the small sample size), however we are able to look in more detail at the larger group of those that have undertaken some form of cycling or mountain biking.

There's all sorts of interesting data in this dataset, such as that 63% of those that reported undertaking these activities had been to Tasmania before, 58% were here for a holiday, 45% traveled in parties of two and none reported travelling with a tour group.  17% reported that their main form of transport was by bicycle (so presumably touring), 31% rented a vehicle, 21% were travelling in their own vehicle and 7% by bus.  48% stayed in hotel/motels, 27% stayed with friends and relatives and 27% stayed in caravan parks (hello, my budget amigos).  Finally, a piddling 20% reported visiting breweries and 26% visited wineries - which straight away says to me that these might not be mountain bikers, especially as 49% reported browsing the markets.

What is a shame, is that missing bit of critical information about whether these people are just whizzing down Mt Wellington on a tour, borrowing a mountain bike from a caravan park and riding down the road to the shop or whether these are people that have come here to ride.

Until we know that, all we really know is the maximum size of mountain biking and cycle tourism in terms of visitor numbers, not it's actual size.

The statistics for this analysis were drawn from the TVS Analyser (http://www.tourismtasmania.com.au/research/tvs) downloaded on 19 March 2016.  Any mistakes in interpretation or data entry are my own and are accidental.  If anyone picks up any errors or discrepancies please let me know and I'll be happy to fix them.
Tweet