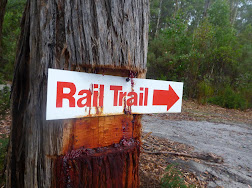 Progress on the Dorset Rail Trail between Tulendeena and Legerwood has stopped because local landowners have raised concerns about the next proposed section of trail.

Their concerns apparently include that the trail will be too close to a slaughterhouse, and that if built, the new section will result in the closure of the slaughterhouse and local butchery.

The 18km that have been completed has apparently been very successful and communities have reported a great deal of activity along the trail. This is obviously invaluable for these communities through attracting interstate visitors, stimulating the economy, encouraging healthy activity and promoting positive environmental practice.

However anyone who has ridden the trail would appreciate that it currently begins and ends in quite remote locations and that the proposed extension would be a real bonus.

So tassietrails.org isn't into political lobbying, but apparently the overwhelming number of letters sent to local Parliamentarians has been against the extension, so if you like the trail, want to voice your support for the project and even up the numbers a bit, you can find the list of current members for Bass here and what you write is up to you.

Over here in Europe, where I'm currently cycle touring, I've followed many major tourist cycle routes that have weaved in and out of farms, sawmills, logging operations and quarries and so I know that it is possible for these activities to work side by side.

We just have to get past the fear of the unknown and new, and look for some real solutions that suit everybody.

Source: based on a Tbug newsletter received 27 Sep 2013.
Tweet