Strava data for the first quarter of 2016 seems to show that the Blue Derby trails and the North South track are the most popular riding trails (amongst strava users) in Tasmania followed by the Meehan Ranges and the trails in the Kate Reed NRA.  Tasmania's mountain bike trails are still a long way behind some of Victoria's and the ACT's key mountain bike parks.

===============
Here’s something you may not know – if you’re willing to spend an hour on the last day of each month trawling through strava segments you can actually generate information on the number of unique strava users that have ridden specified segments for that month (you can’t go back and look at previous months, so you have to do it on the last day of the month).

You can also pull out the number of riders for the year to date.

So, if you were to find a strava segment that everyone (or at least most everyone) would have to ride in each of the major mountain bike areas and then you extracted this data for a few months, you’d start to get a bit of a picture of the comparative popularity of different trails amongst that user group.

This thought occurred to me back in January when I was trying to do a research assignment on mountain biking in Tasmania and so for the last three months I’ve been pulling out this strava data and seeing what it might tell me about where strava riders are riding in Tasmania and also how we might rank against some of the more popular areas in Victoria and the ACT ...

The results are really interesting.

The figure below shows the cumulative count of unique strava riders that have ridden each of the main areas over the first three months (I did look at several other areas, but the strava ride counts were so low they were't worth including). It is important to note that this is a net year to date count, so if someone rode a trail in January, then they have not been shown again in the February or March counts in the table below, so this isn’t the number of times a trail has been ridden, but the number of unique people that have ridden a trail year to date. 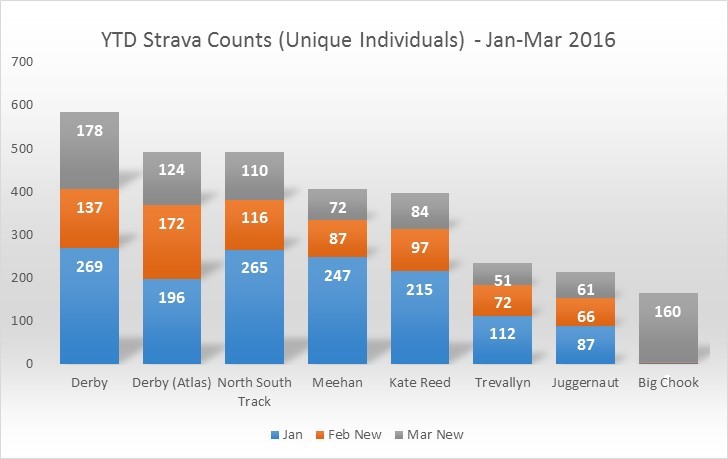 The Blue Derby network, followed closely by Atlas (also at Blue Derby) and the North South track in Hobart are attracting the most strava riders.  This is then closely followed by the Meehan ranges and Kate Reed (neck and neck), then another small drop down to the Trevallyn trails and then Juggernaut (the Big Chook trail is just shown here for completeness, but it only opened in March so shouldn’t be considered in a YTD comparison.

Is that ranking a surprise to anyone? Our most iconic tracks (Blue Derby and North South) which have the best riding and most beautiful scenery are the most popular places to ride, followed by Hobart and Launceston’s most popular riding areas.

One thing that did surprise me was that the Derby and Atlas counts didn’t seem to get any significant lift in February when the Blue Dragon event was being run. I had expected that a lot of the 200+ competitors would have been using strava and that this may have given the trail count a boost.

Well try and stick with me, because it is important and probably more clearly illustrated in the next figure which just shows the number of strava riders that rode the trails in March 2016 broken down into those that rode it for the first time in March (Mar New) and those that had already ridden the trail in 2016 (Mar Repeat). 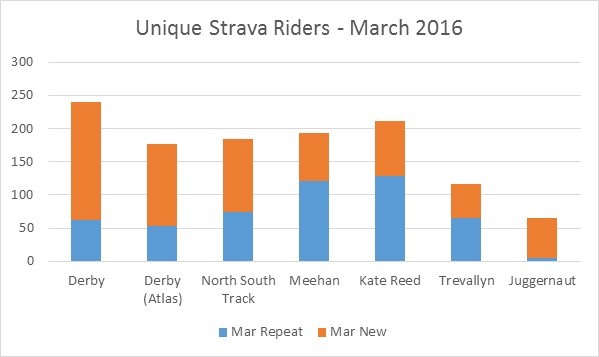 Some things that jump out at me straight away from this figure is that the Derby Trails, and to a lesser extent the North South track, seems to be attracting far more new riders in March, than the local trails around Launceston and Hobart (The Meehan, Kate Reed and Trevallyn).  This again makes eminent sense to me as the local trails next to the major cities get a lot more repeat use from local riders.

Juggernaut is a particular curiosity as it seems to be attracting virtually no repeat use in March, attracting only new riders. It will be interesting to see if that trend continues.

Now the other interesting thing to look at is how our most popular strava trail (Derby) compares to some of the other major mountain biking areas in Victoria (Lysterfield, Mt Buller, Forrest and the You Yangs) and also Stromlo in the ACT.

The results are in the figure below and, not surprisingly, the sheer number of riders in Melbourne and Canberra that flock to Lysterfield and Stromlo respectively overwhelm the strava counts in other areas, and in Tasmania.

What is interesting is that Mt Buller with its Epic Trail is still pulling significantly more strava users than Derby, but at the same time Forrest which in some ways has many parallels to Derby, just a much bigger population base to pull from two to three hours away in Melbourne, isn’t attracting that many more strava riders than Derby.

I have no explanation for the low count in the You yangs, although it was difficult to decide which segments to use for the comparative count for both Forrest and the You Yangs due to multiple trail heads and ride options in these areas (I chose segments with the highest ride count in both these areas). 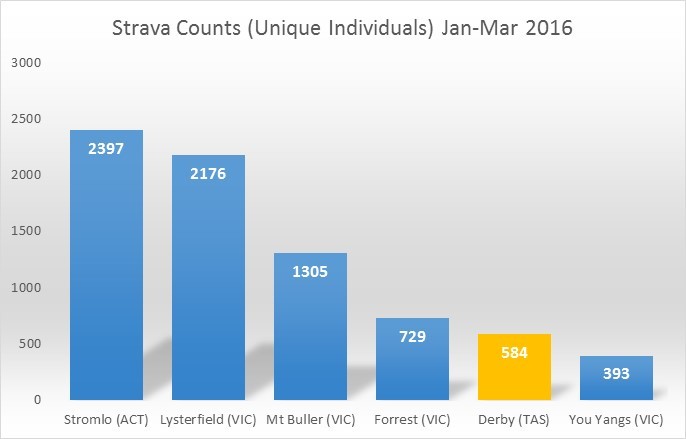 Of course all of this data needs to be interpreted in the context that it is only recording those riders that are using strava (and which get detected as riding the segment – I for example rode the Big Chook over Easter and wasn’t matched against most of the strava segments for that ride).

What would be ideal is to compare the strava counts to trail counter counts for the same period to see if we're capturing 0.1%, 1% or 10% of the ride population, but I'm not sure those that own the trail counters are ready to do that yet.  As such we can’t extrapolate this data into the entire population of riders, but it is, at least until better surveys and track counter information becomes available, a useful insight into what is happening out on our trails.

I hope to bring updates on future numbers as they come to hand.

2 comments
Trailforks
August 10, 2016
Hi John,
Great article, I can see a lot of time went into compiling and presenting the data. Another resource you may want to look at for trail usage stats is the Trailforks App www.trailforks.com/apps/map/ . Although it doesn't appear to be as widely used as strava, the beauty of it is that it is MTB specific and provides great crowd sourced database on local trails including usage stats and maps. It can be automatically linked to a riders strava accounts so users only have to download their ridelog info once and both apps pick it up. I noted that one of those who provided a comment on your article, Jake Hannah is a local administrator for Trailforks so perhaps he may be a good source of info on how to best use/extract/interpret the usage stats.
MR
Murray Root
Report this comment Comments (0) | Was this comment helpful? 0 0
Why not use Attempts?
April 12, 2016
Excellent article very well explained. I have been playing around trying to glean useful information from Strava for a while as well for my local trails (Majura Pines, Canberra). I have even contacted Strava about purchasing data several times but they never respond!

I understand from a tourism point of view that you are interested in *new* unique users. However the total number of times a trail has been ridden is of much more interest to me. This can be calculated in the monthly difference in the "Attempts" for that segmentm found in faint grey at the top right of the segment page.

At Majura Pines we are also in the fortunate situation where we have 2 trail counters on the trails. What we don't have is one trail that everyone has to ride on each visit. However by combining the above method on a variety of popular trails/segments and the trail counter data I hope to build up a solid picture of trail usage across the network.