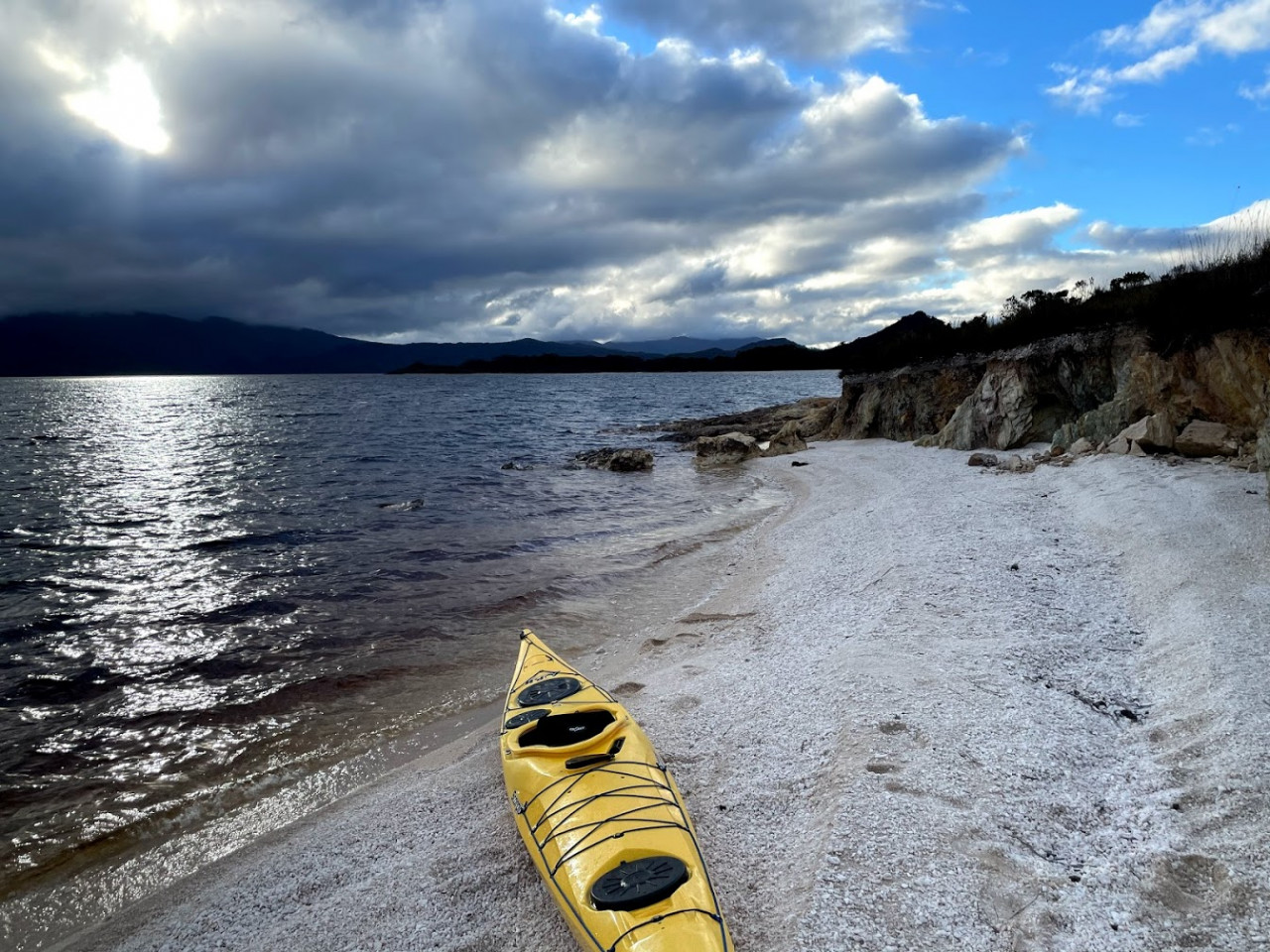 I've wanted to explore Lake Pedder by kayak for a long, long time now, even before I saw some of the magnificent photos taken by Geoff Murray of camping by the lake shore.

But I've also heard whispered stories of challenging and changable conditions, strong winds and steep waves, which combined with having a limited knowledge of where I might be able to camp and the best places to paddle have meant I've never actually put my boat on the water and gone off to explore.

And to be honest, even this short trip was a touch and go proposition where I only decided I was actually going to go around 11am, which then led to a frantic hour of trying to find all my kayaking and camping gear (much of which hadn't been used for over a year) and then the two and a half hour drive to Ted's Beach (just before Strathgordon) to my launch point.

That two and a half hour drive became closer to three and a half hours after a need to stop in New Norfolk to buy something for dinner and then one of those moments we all dread where a strong gust of wind picked up the kayak on the car roof and (due to a loose mount which I hadn't checked) almost blew it off the roof at 90km/hr.

Anyway, after my heart rate dropped back under 200 beats per minute and I had double and then triple lashed the kayak back onto the roof racks, I made it to Ted's Beach a bit after 3.00pm, unloaded the kayak and stuffed everything I hope I needed inside and finally set off around 3.30pm.

My rough plan was to paddle the 8 or 9kms down to Hermit's Narrows and try and find somewhere to camp around there for the night, before exploring that area in the morning and then returning back to Ted's beach, via Camel Island the next day.

However, due to the very late start on the water, and despite a nice tailwind, it became apparent after about an hour on the water that it was likely that I'd only get to the narrows around dark which would have made looking for a campsite a bit challenging, so when a burst of sunlight came through the clouds and lit up what looked like a lovely beach off to my left with a shelf for camping about 6kms from Ted's Beach, I decided that this must be divine intervention of some sort guiding my way and headed in for my first night of sea kayaking in several years.

It is funny camping beside a lake … I really struggled with the idea that I didn't have to worry about tides as I set up my tent on the beach about 10 cm's (in height) and half a meter in length from the waterline and I confess I lay there for many hours that night hearing the waves crashing just centimeters from my tent convinced that the next wave was going to come into the tent. 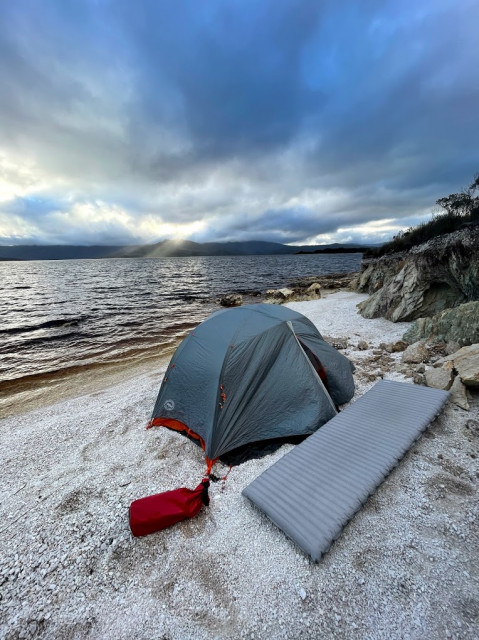 But of course it didn't, and instead I enjoyed a lovely dinner (roast chicken and salad purchased in New Norfolk) while I watched the sun set across the lake and wondered why I hadn't done this a lot, lot sooner.

To be honest, I didn't sleep well that night, mainly I think because the wind stayed pretty strong through to the wee hours of the morning and the waves and wind shaking the tent kept me awake (lesson learned for next time – pick a beach that is inside a sheltered bay, not straight on the lake) but all that was forgotten as I emerged from my tent the next morning and got to slowly drink a cup of freshly brewed coffee on a silent morning next to a beautiful still lake before packing up and pushing off to see what I could see. 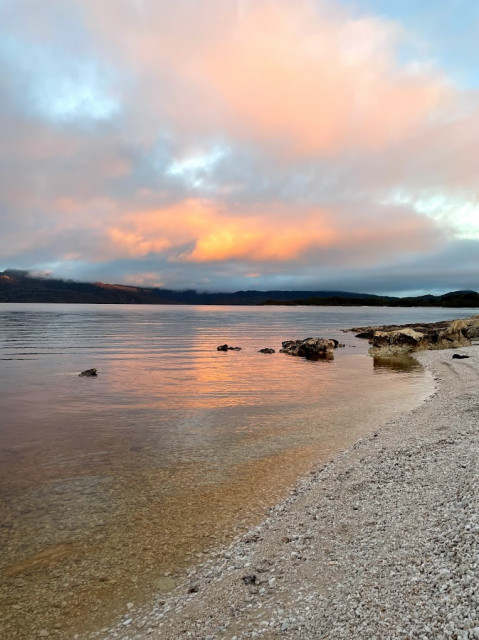 The mornings paddling was glorious as I followed my nose around islands and in and out of little bays around the Hermit narrows, and then across to Camel Island which had this fascinating little sand spit on the SE corner which looked to be a potentially interesting place to camp on a future trip.

Then, as I was enjoying myself so much I decided to abandon my original plans of just retracing my route and instead pointed my bow at Green Tree Island on the other side of the lake, and sidled past the island before landing on a steep beach on the other side (I should note that there is telstra phone coverage at Strathgordon so for much of this trip I had mobile coverage and was able to communicate my location to others).

As I paddled across the mouth of Wilmot Bay, I saw two or three old sail and rowing boats heading across from Strathgordon and into Wilmot Bay, but they passed me by at a distance without saying hello, so I don't know what they were doing on that day.

From here, I just followed the coast back up to the Bell Basin Narrows where it was a short hop, skip and a paddle back to the other side of the lake, and then I just paddled my way up to Strathgordon, passing a small group of paddlers (on a commercial trip) heading out in the opposite direction (again, maybe I looked mean, but they didn't even return my hello's as they paddled past).

As I got to Strathgordon the last of the mornings clouds burnt away and the last couple of kilometres back to Ted's Beach were just amazing … I was almost tempted to go and do the loop a second time!

All up I paddled about 7kms on day one and 23kms on day two (a bit further than planned!). I was still back at Ted's Beach by noon on the second day. 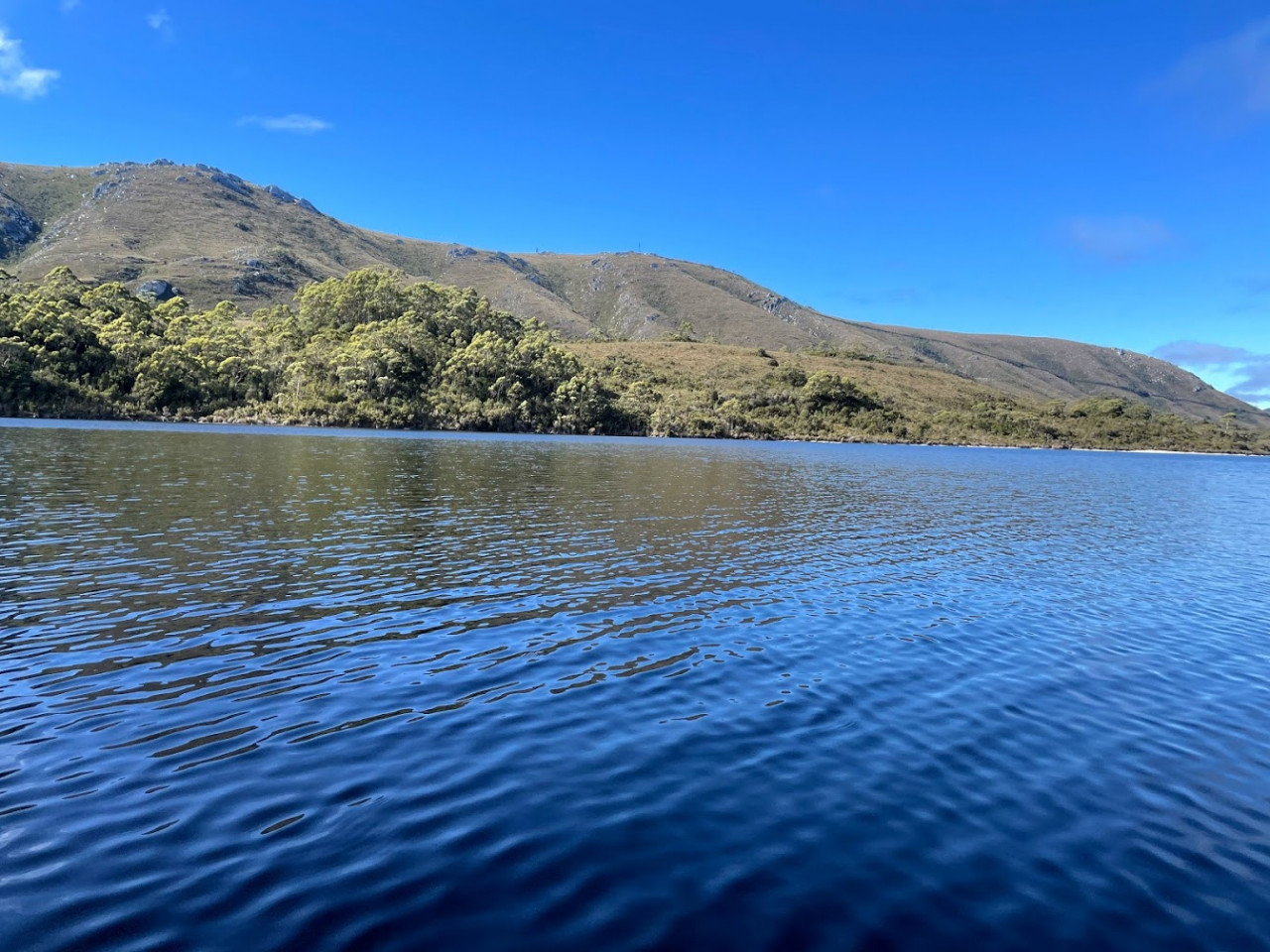 I encountered an interesting wind phenomenon where the wind was blowing towards the shore on both sides of the lake which seemed weird and put a dent in my idea during the night that if it was windy on one side of the lake, I could just paddle across to the other side for a quiet night's sleep. I don't know if this was just the wind patterns I encountered on the day.

In terms of camping, there were certainly lots and lots of beaches that looked to provide possible camping opportunities, but at the same time some beaches which from a distance looked great, turned out to be quite steep or covered in quite sizable rocks. I also lost two tent pegs in the beach I camped on (they tent blew off them in the night and the soft rocky surface just ate them up and I couldn't find them despite a lot of searching). I think the trick would just be to start looking for a camp early and look for one in a sheltered bay.

Ted's Beach has a day shelter, toilets and campsites and does have water though not sure how much I'd trust it.

All up, I am very glad I finally got out onto the water at Lake Pedder, and now that I've seen how much more there is to explore I'm keen to go back and explore further ...