Let's face it - Tasmania's North East is spoilt for amazing purpose-built mountain bike trails that could keep you happy for weeks on end.

Which begs the question of why I found myself unloading my bike at the corner of Bellingham Road and Bridport Road about to head off for a 60km+ soujourn along beaches, soft sandy tracks and busy roads, with not a single kilometre of purpose built moutain bike trail included in the route, and to be honest the answer is something along the lines of because it was there, because I'd been there before and not quite closed the loop and I was curious to know what it would be like ...

And that was obviously enough. 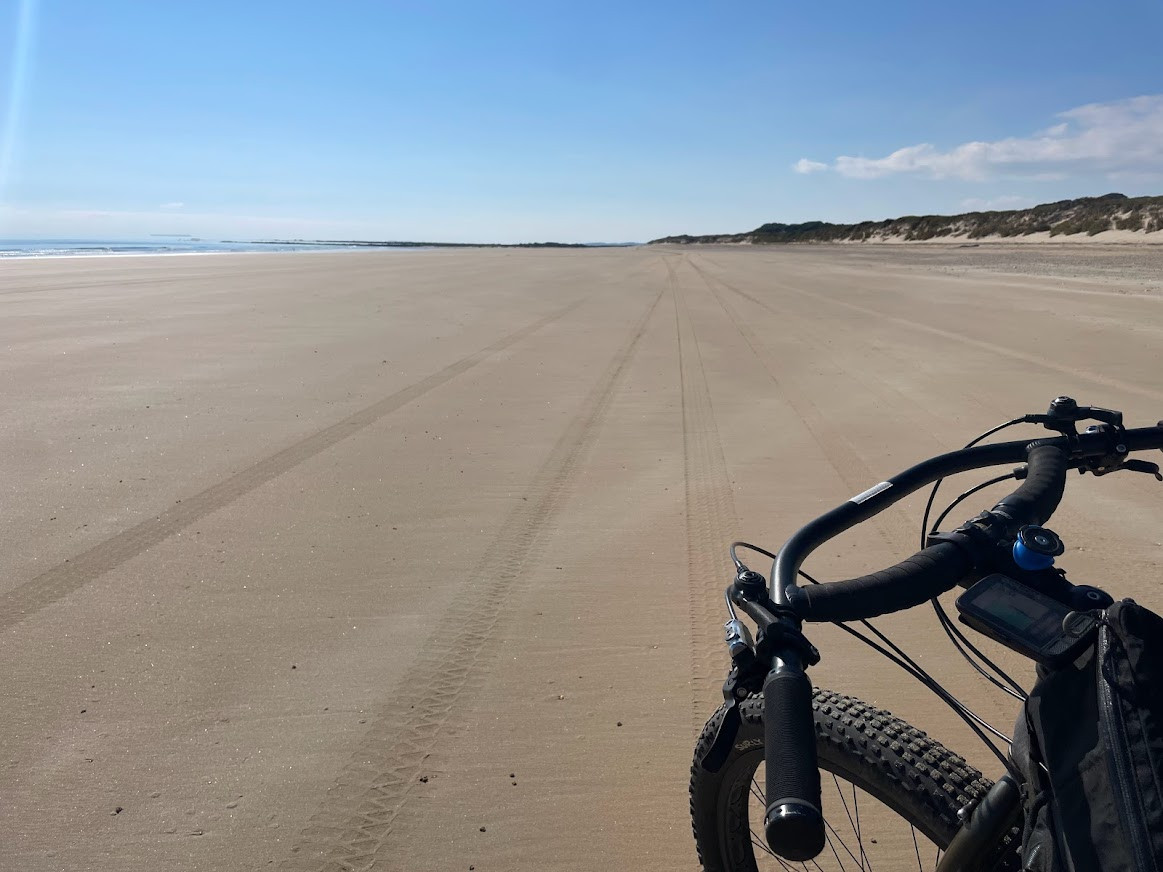 So the plan today was to ride out to the coastline at Millers Beach, and then follow the 4WD track from Bellingham to Bridport, hopefully getting there in time for lunch before cycling back along the busy Bridport Road to my car.  My calculation showed it shold be about 50kms (it turned out to be 62kms).

The Parks description of this trail is not inspiring for mountain biking: "Difficult - for experienced and licenced users with registered 4WD vehicles and motorbikes only. Deep bogs, steep slopes, soft sand are likely to be encountered."  and having tried this route from Bridport back in 2015, on a fatbike no less,  I knew the escription wasn't that much of an exageration.

But I had planned my ride to coincide my time on the beach with the low tide and I had my trust Surly ECR with 3 inch tyres and a bucket load of optimism to get me through ... so off I set. 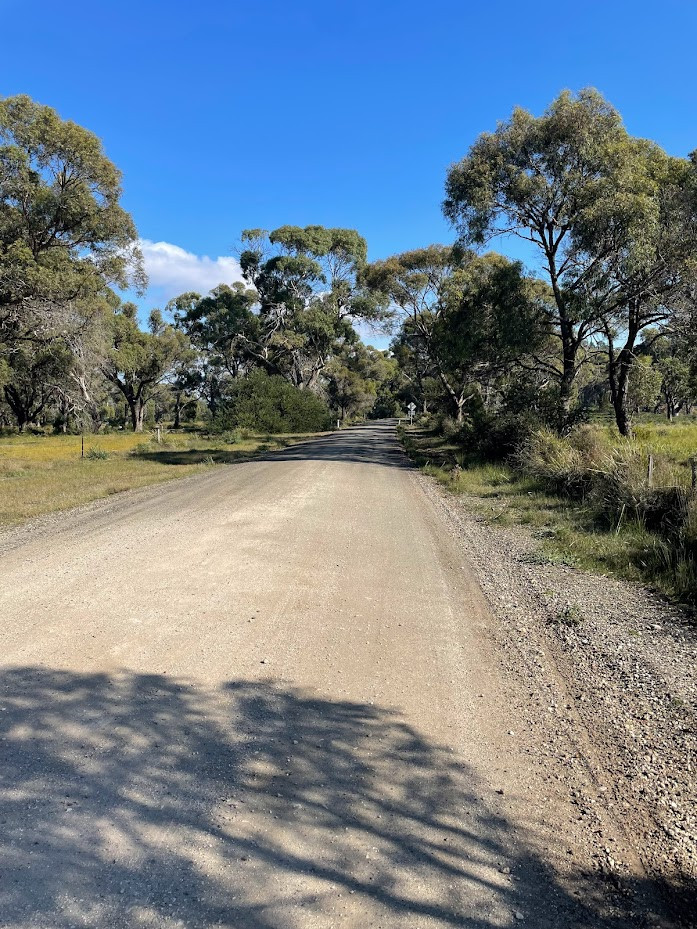 Road down towards 4WD Track

There wasn't a lot of science behind why I started at the Bellingham Road turnoff, rather than at Bridport or at the start of the track down by Bellingham, other than that I didn't see any logical reaon to drive down to the beach, only to then have to cycle that distance at the end of the ride and then drive back out again, and I also really want to ride this rout in a clockwise direction, so it just made sense to start where I did.

As it turned out, it was just over 6kms from where I started down to the car park at the start of the 4WD track and riding the undulating bitumen and gravel roads was a nice way to warm up and get into the day.

From the car park it was another 700 metres on a fairly rough track onto Millers Beach, where I was just greeted by one of the most amazing exanses that I could have imagined.

With the tide out, there were ovals of hard packed sand to ride on, and the next 17kms was just smile on your dial riding as I rambled along wide open beaches and around softer (but still ridable) headlands feeling like the whole world was alive and in front of me. 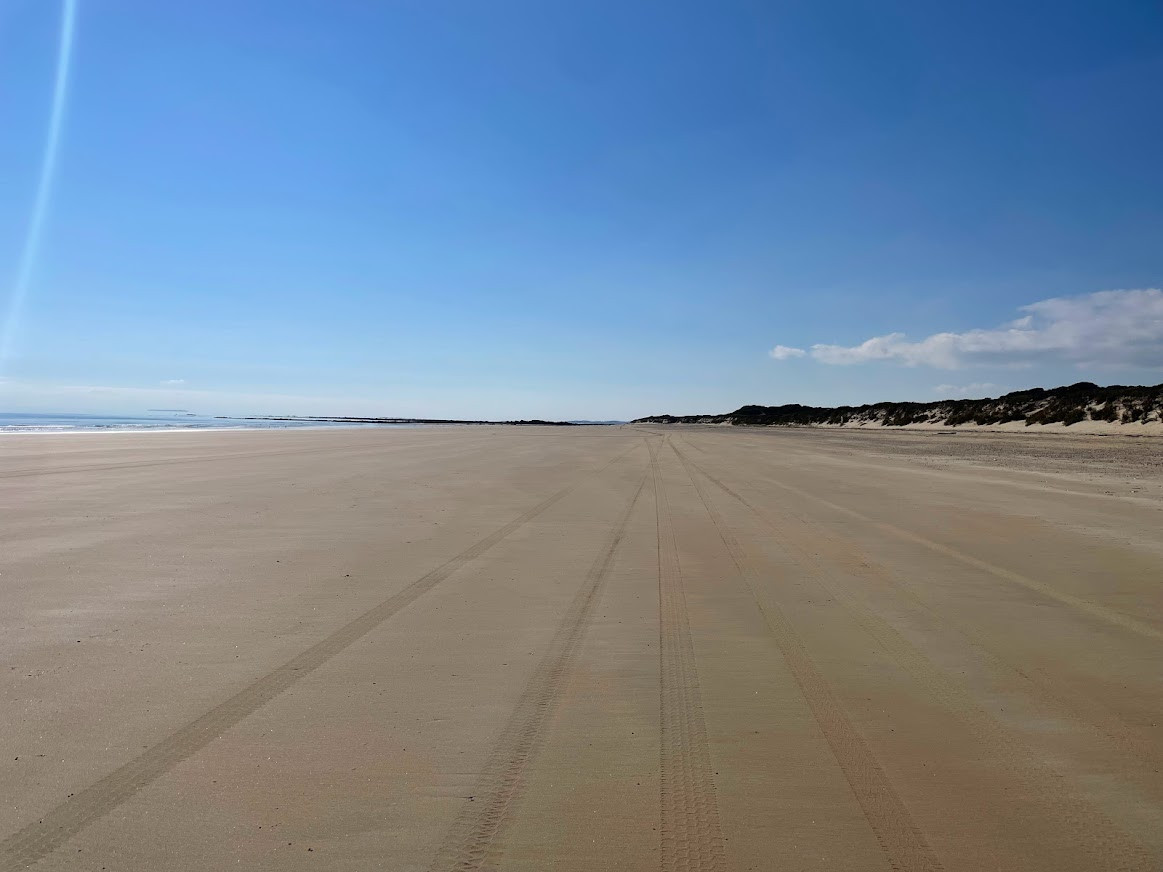 There was one small water crossing (Liuttle Pipers River) which I had been a bit concerned about (one of the reasons I started where I did) but it turned out to be just a small stream at this time of year, probably 10cm deep at it's deepest, so I was able to easily cross that and carry on.

I had also expected to cross West Sandy Point on the same track I had used last time, but as it turned out I was able to follow a well developed 4WD track all the way around the peninsuala which was superb.

It was also nice to see all the 4WD's out and about (though some of the tracks up the dunes raised the heckles in my mind slightly) and they were all very friendly. 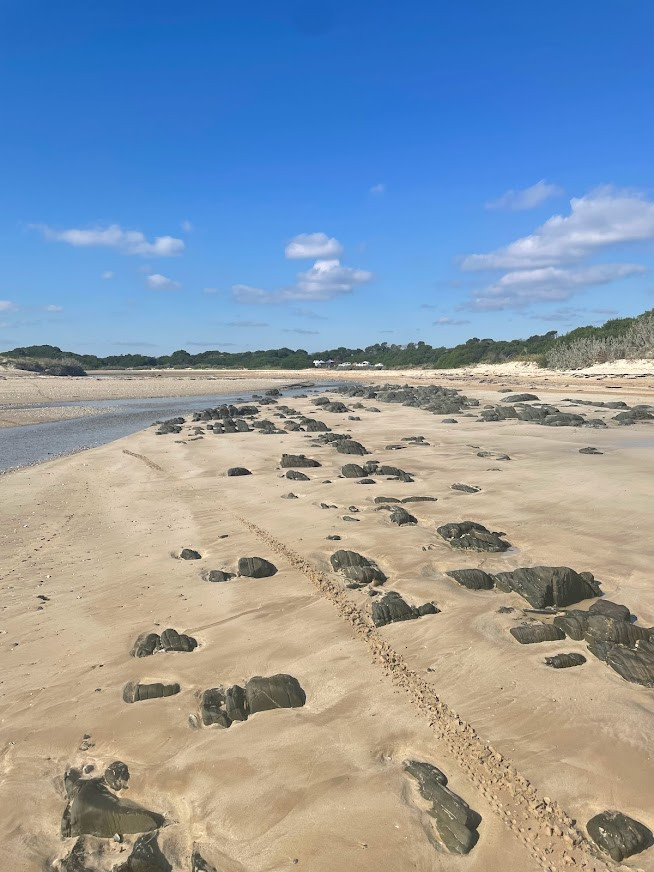 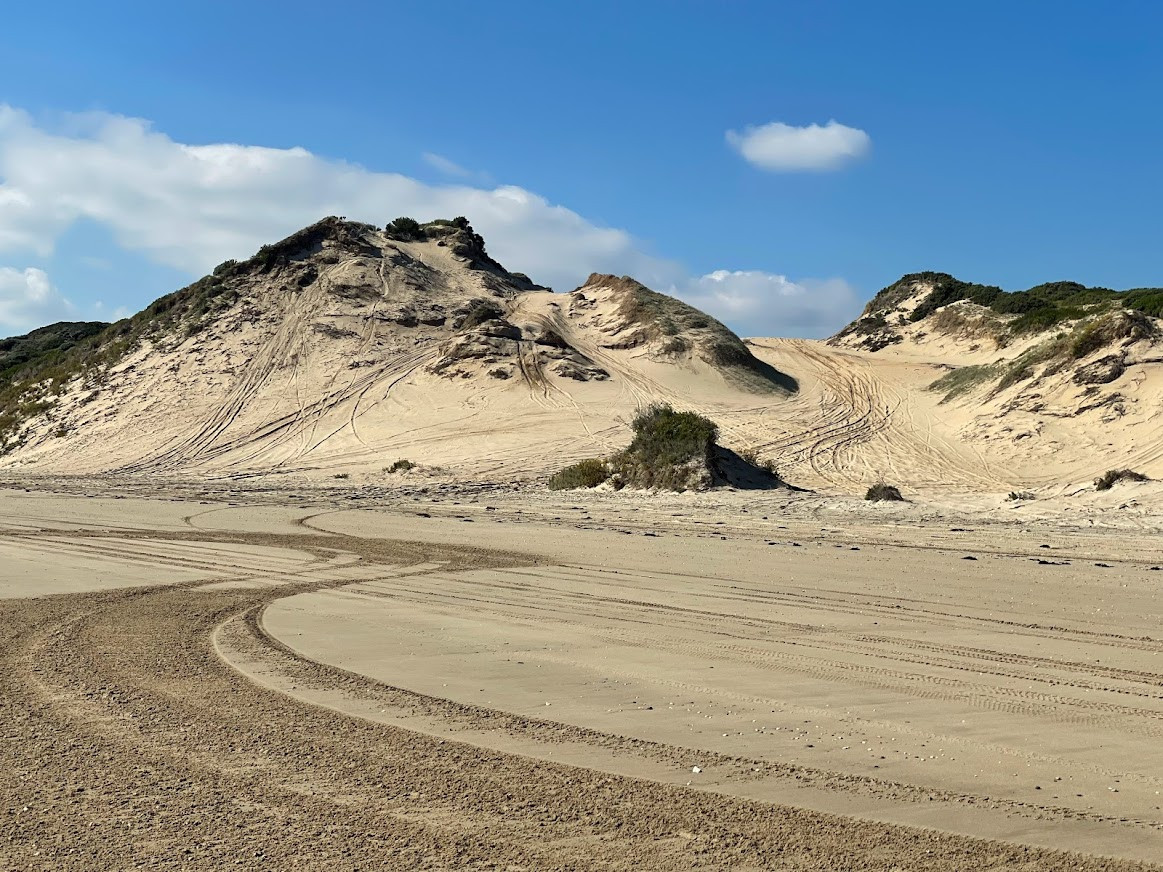 Some of the routes chosen by my 4WD breathern were questionable ... 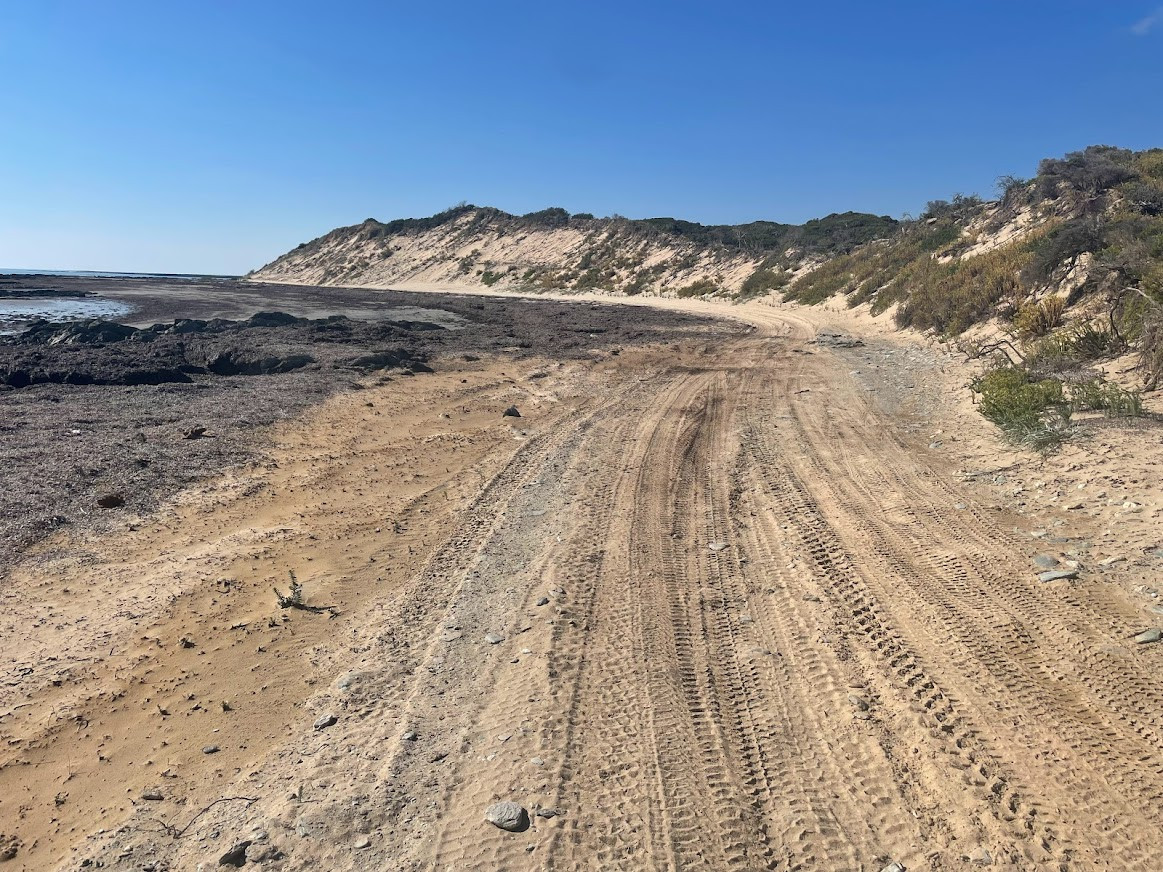 Typical track around the headlands 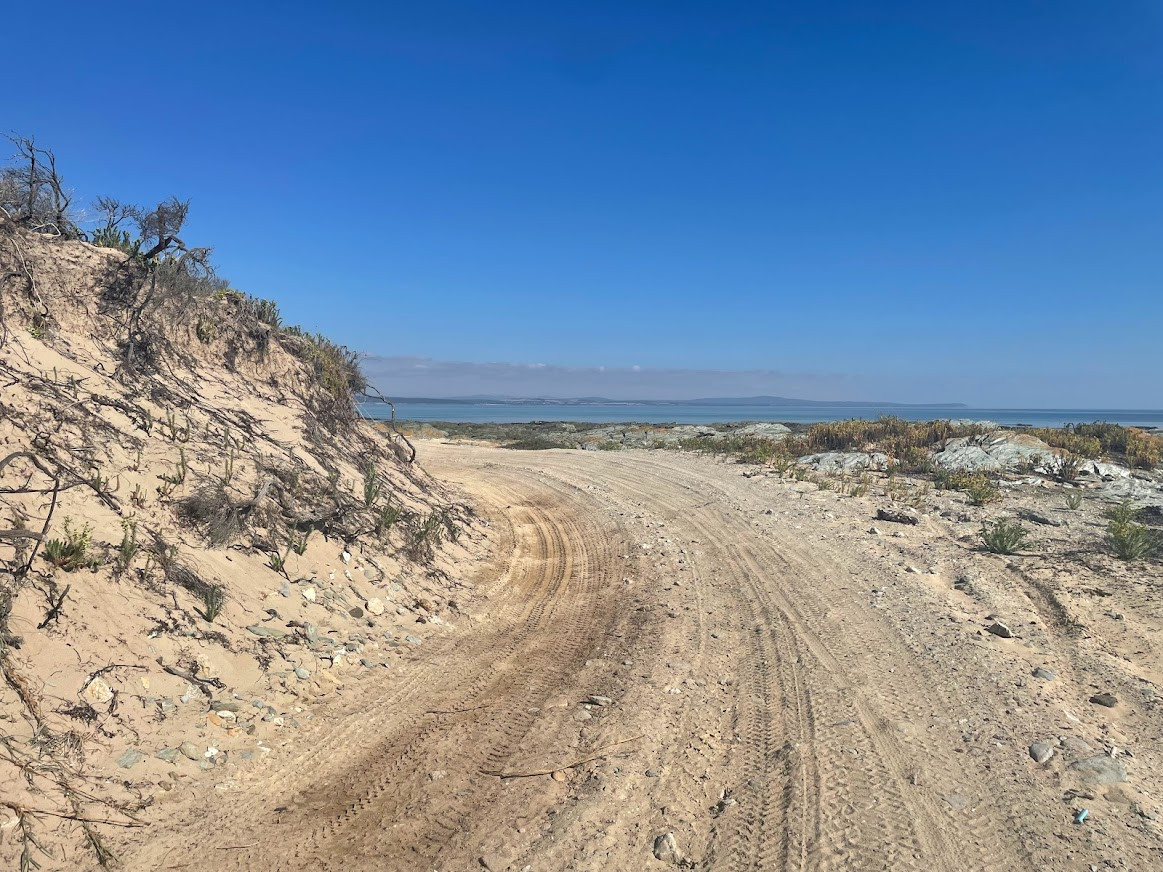 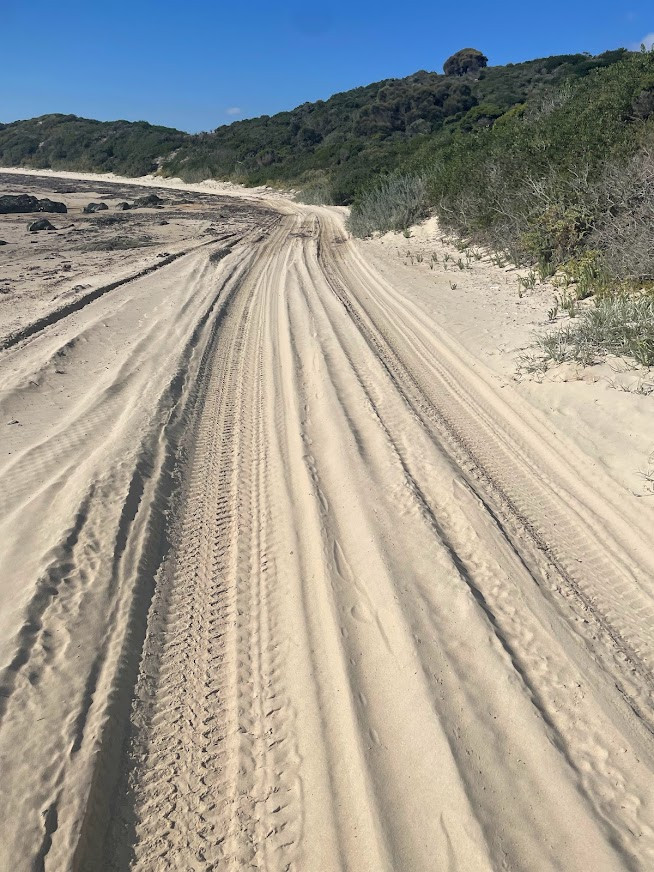 Some sections of the track were tricky, but rideable

17kms was just perfect in terms of distance (enough that I really felt like I'd soaked it in, but also just enogh that I was ready for something different when I did finally come to the track leading off the beach).

I had been a bit worried I might miss the exit, but basically all of the wheel tracks just stop and head out together, and if that isn't enough of a give-away, there is also a sign saying not to proceed past this point.

Now, I'd cycled this bit before so I knew I was in for a lot of soft sand and pushing for the next 3kms and that is exactly what I got.  Even with fat tyres and some quite long downhill sections, I still found myself pushing and walking 70%+ of this section, not that it worried me.  I just settled in and pushed on. 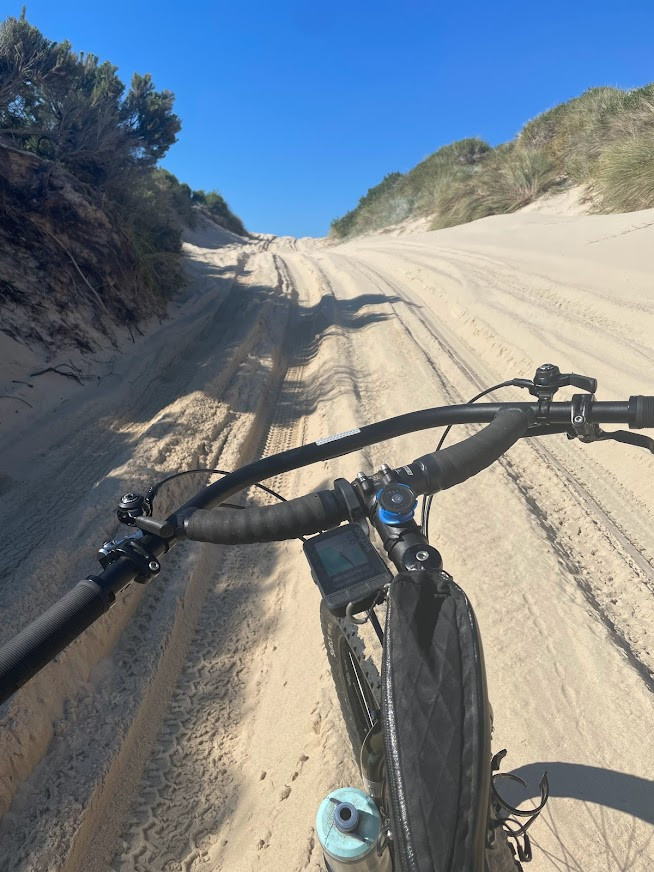 Pushing bike off the beach 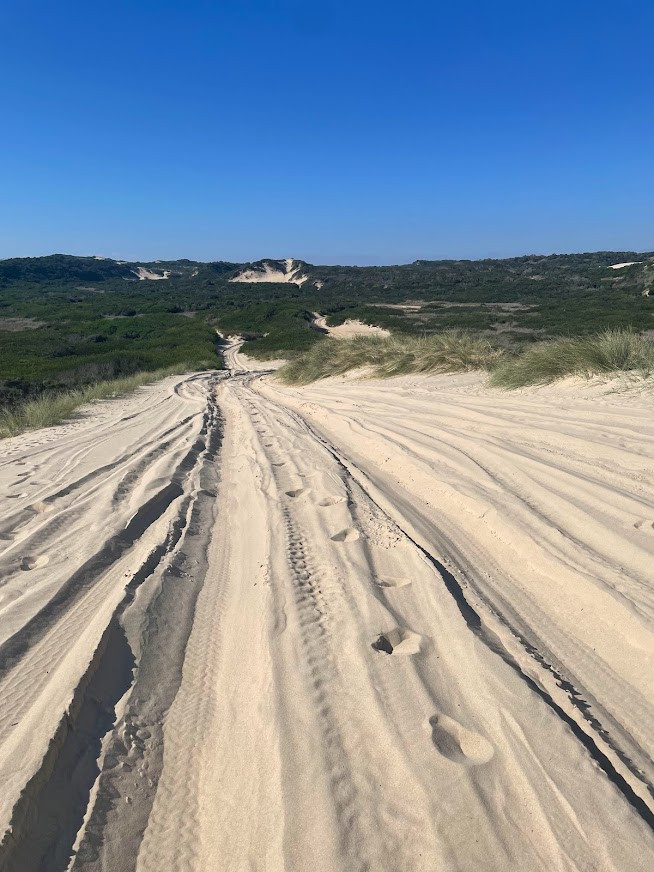 Track off into the distance - you just know you're going to be walking.

Now I had hoped (planned) that rather than having to cycle into Bridport, I'd be able to ride along Lades Beach and then Adams Beach to enter Bridport from the coastline, but alas a sign declaring that only authorised vehicles were allowed on that beach put paid to that plan, so it was out onto Sandy Points Road for the 7.5 km ride into Bridport. 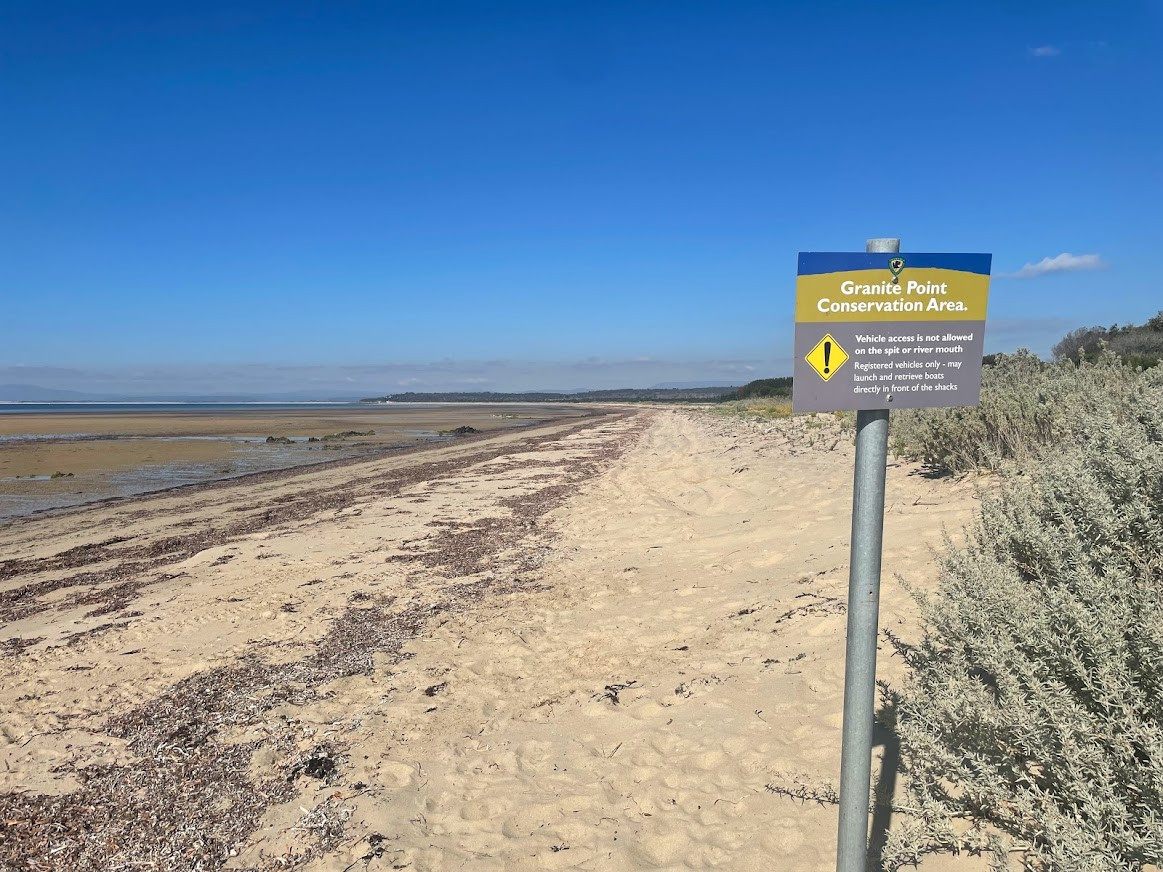 Signage indicating I couldn't ride along the beach to Bridport

As it turned out this was more blessing than curse, because just as I was coming to the top of the hill before entering Birdport (yes there is a climb, but it's only about 100 metres in height) I saw a couple of cyclists crossing the road in front of me, I reaclled that there is in fact a walking / multi use trail that does run through Bridport which I had ridden many years ago.

I initially went off left to head out to Granite Point, but there was a very clear sign there saying no bicycles allowed, so I instead headed off to the right (south) through a small car park and onto the trail which heads that way and which allows cycling.  The trail from here is mainly downhill and twists and turns through some lovely dry coastal forest for about 4.5kms until it finally drops you out on the Main Street just next to the Brid River bridge and was a wonderful way to finish off this section of the ride. 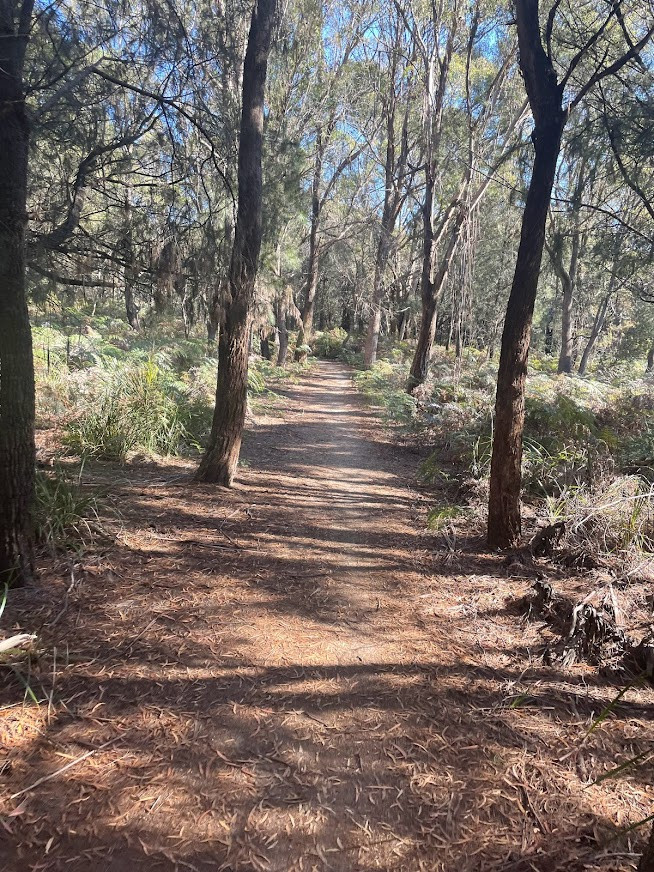 It had taken me about 3 hours of riding to get to this point, and I was ready for lunch, so I crossed the bridge and then jumped onto the coastal track on the other side which I followed around to near the visitors centre where I found a nice table for lunch and a break, before retracing my tracks back along the trail, and then out onto Bridport Main road via Ada Street for the final 20km ride back to the car. 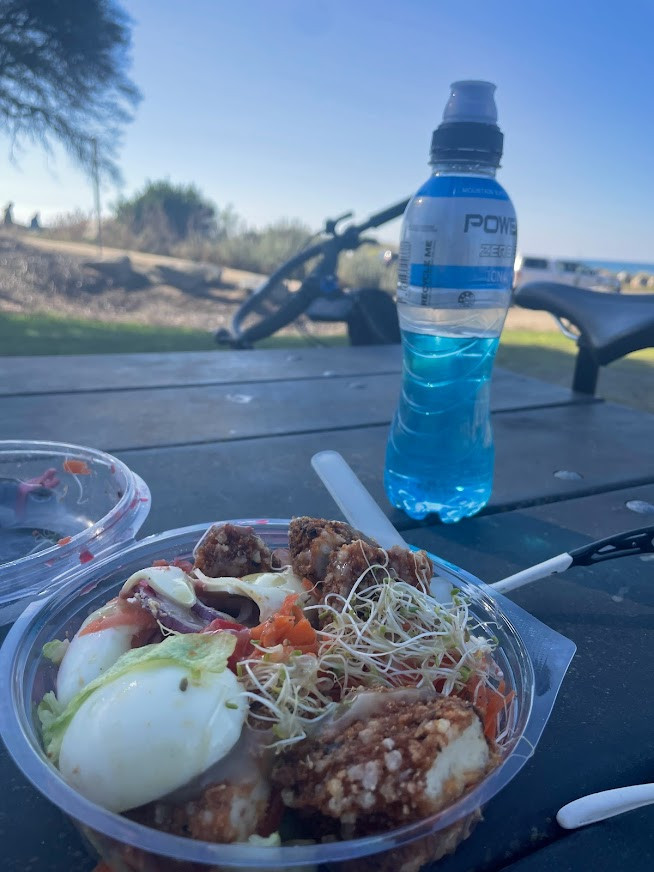 I couldn't have wanted for more from this route.  It was a truly great day of pretty easy riding and I'm so glad I finally made the time to get out and ride it.  While this route won't be for everyone, if you're up in this area riding the Blue Derby or George Town MTB trails and just want to do something competely different and enjoy some amaxzing coastline, then I couldn't recommend this ride enough (for experienced, well-equipped riders!).  While I enjoyed the full circuit, if you could organise a car shuttle or drop off at the Bellingham end, you wouldn't miss anything by not riding the road section.