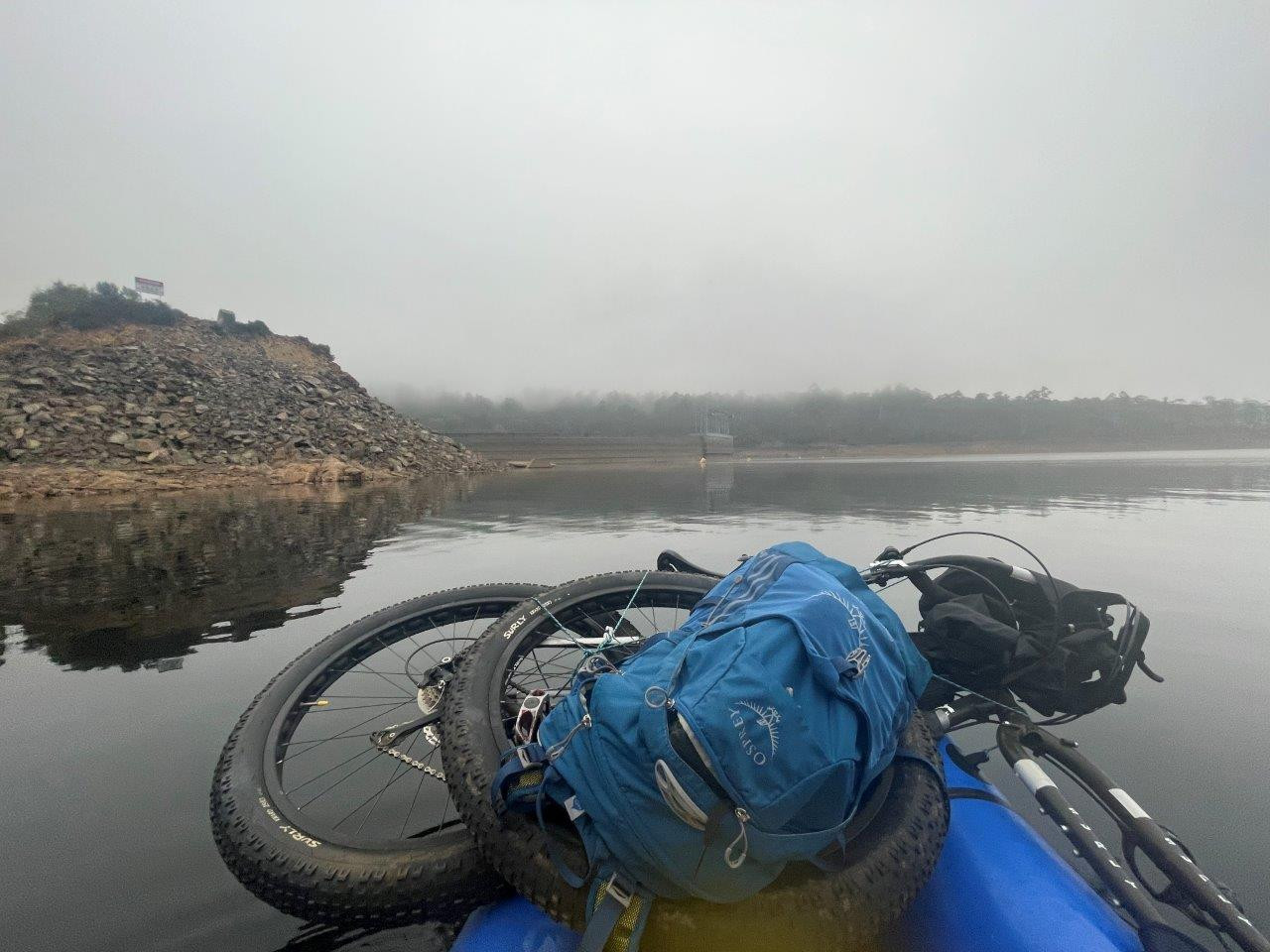 A circumnavigation of Lake King William has been on the to-do list for a very long time, and I have tried (unsuccesfully) to do it in the past,  but today I finally made that all important decision to actually set my alarm and set out to see if it was possible to circumnavigate Lake King William by bike and packraft ... 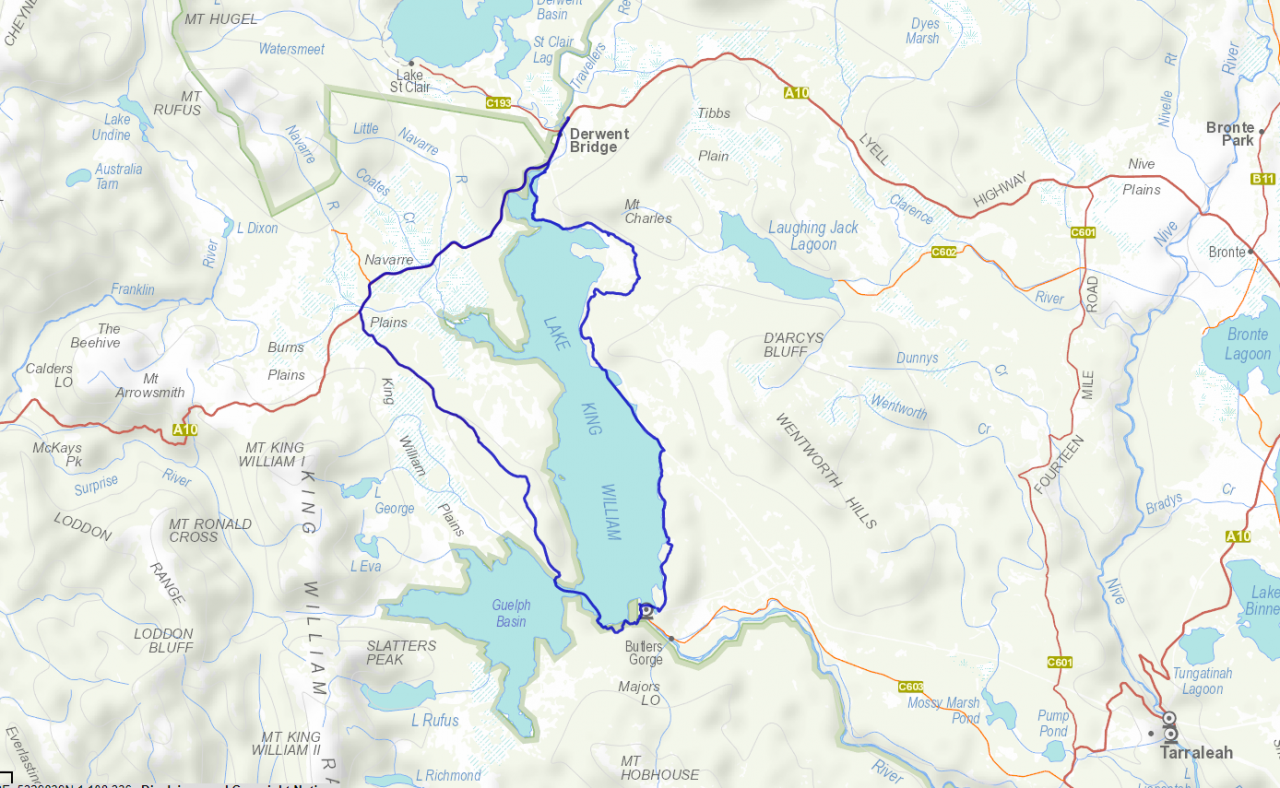 I left Lauderdale around 5am, remembered when I got to New Norfolk that it was a public holiday and so the planned Banjo's Bakery stop for breakfast went out the door, and in the end I was lucky to find a 24 hour petrol station with food stop which secured me the necessary latte and egg and bacon roll to give me energy for the day.

With the early start, I was at Clark Dam (Butlers Gorge Power Station) by around 7.30am and ready to push off from the boat ramp just before eight.

Now, just in case you have read stories about being able to climb around the gates and walk across the top of clark dam and are wondering why I chose to packraft across  - I just want to advise, that I think things have changed and even ignoring all the no-entry signs and barb wire screaming out "don't do it", getting around those gates looks pretty darn daunting and you'd need to have a complete lack of fear of heights (and great climbing skills) to do so in my opinion, which is why the option for me was a packraft.

Suppporting the need for a packraft, there was, in my case, also the other little issue of the need to cross Guelph Narrows which kind of made a packraft a make or break item for this trip.

The crossing across the dam was pretty quick and easy, and in all honesty I could have really skipped this next bit of track and just continued on around the coast in the packraft, but I really wanted to see if I could get all the way out to Guelph Narrows on the bush track I had walked on all those years ago, and at the end of the day I was here for adventure, not efficiency, so I packed up the raft on the other side and set off to see how far I could get ... 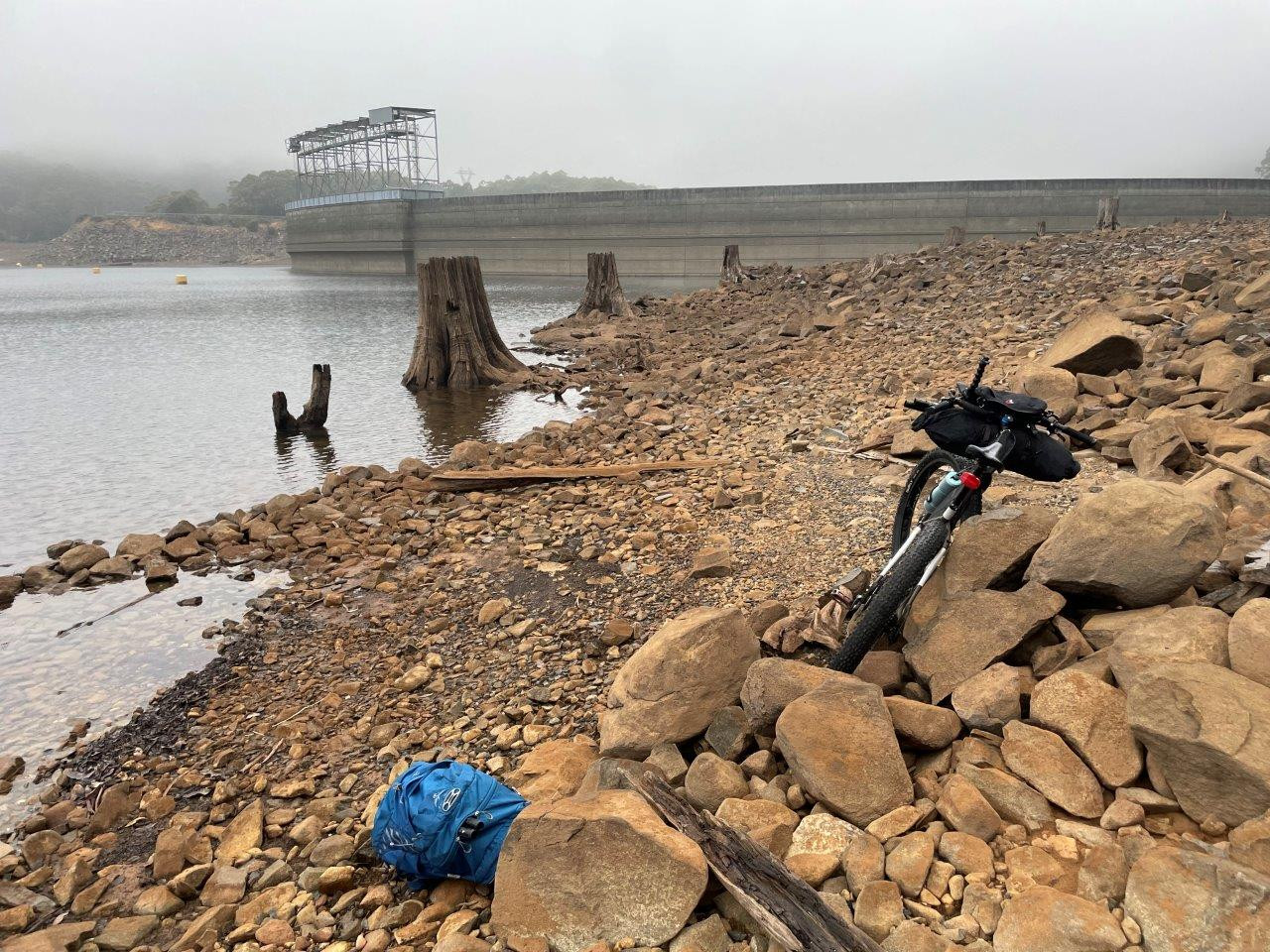 Except, I immediately went the wrong way following what looked like a track off into the bush, but which pretty quickly dead ended leading to a short back-track to the coast.  I then headed left and found the track along to the dam and then up over the hill.

At the top of the hill, there is a much rougher track heading back down the other side into the next bay, and it is a very slow ride down with lots of slippery rocks, downed branches (and trees) and it is very overgrown in places ... and I mean very overgrown ... 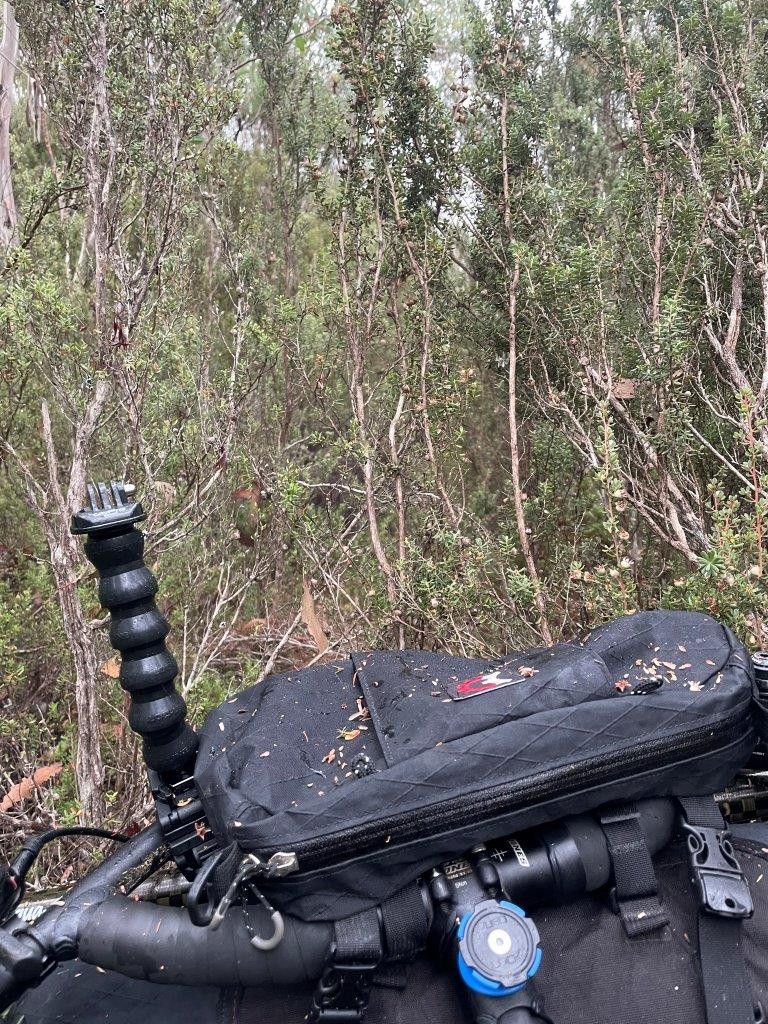 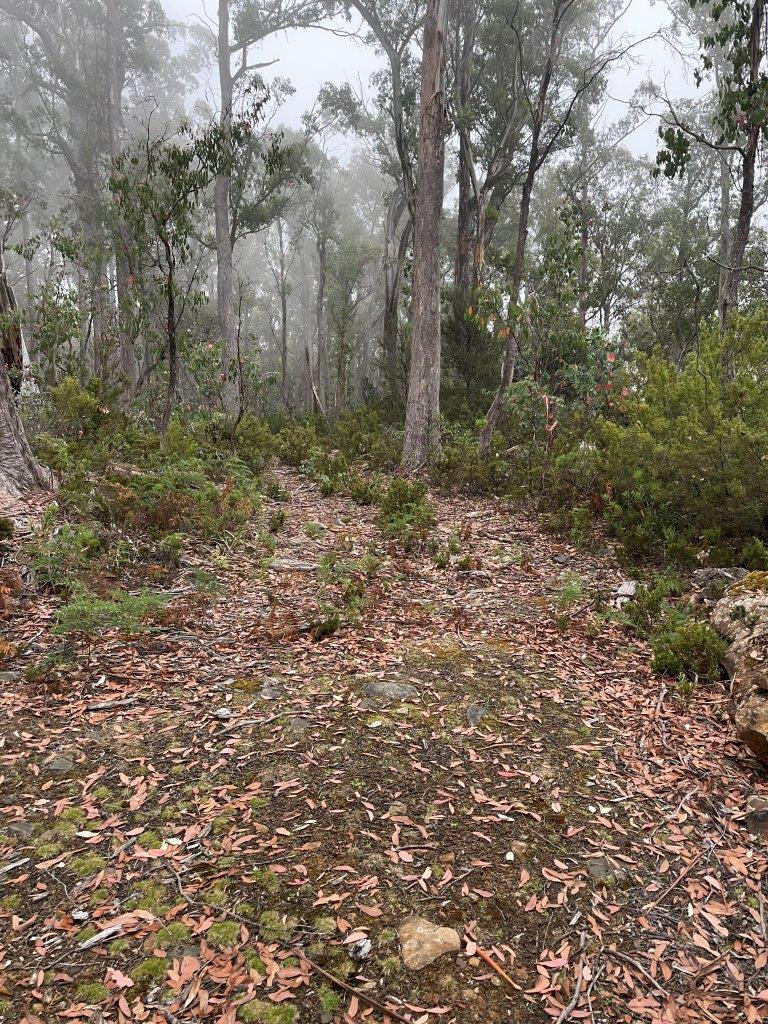 But I was here for the adventure, not to make any speed records and I really enjoyed the feeling of remoteness in this section ... except maybe that moment when I realised that my one and only water bottle had come off the bike and I had to backtrack (thankfully only a few hundred metres) to find it.

I eventually got to a spot where the track was  impassable, and I found myself having to escape onto the lake shore to make forward progress rather than following the track.  I tried once or twice more to get back onto the track, but after several attempts dragging my bike through scrub and over large trees making very little actual headway, I finally let sense prevail and headed down to the lake shore and blew up the pack raft for my second crossing ... 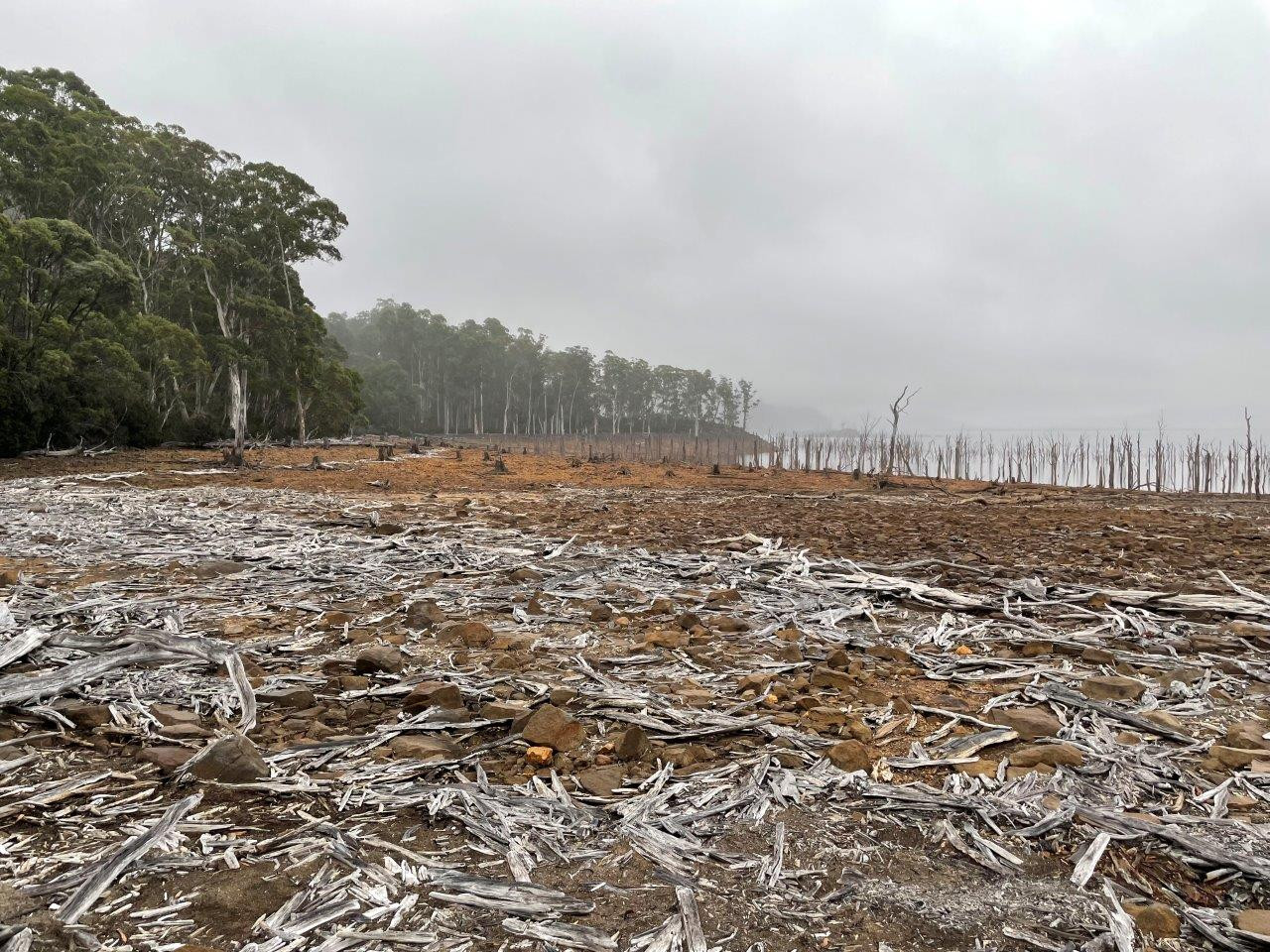 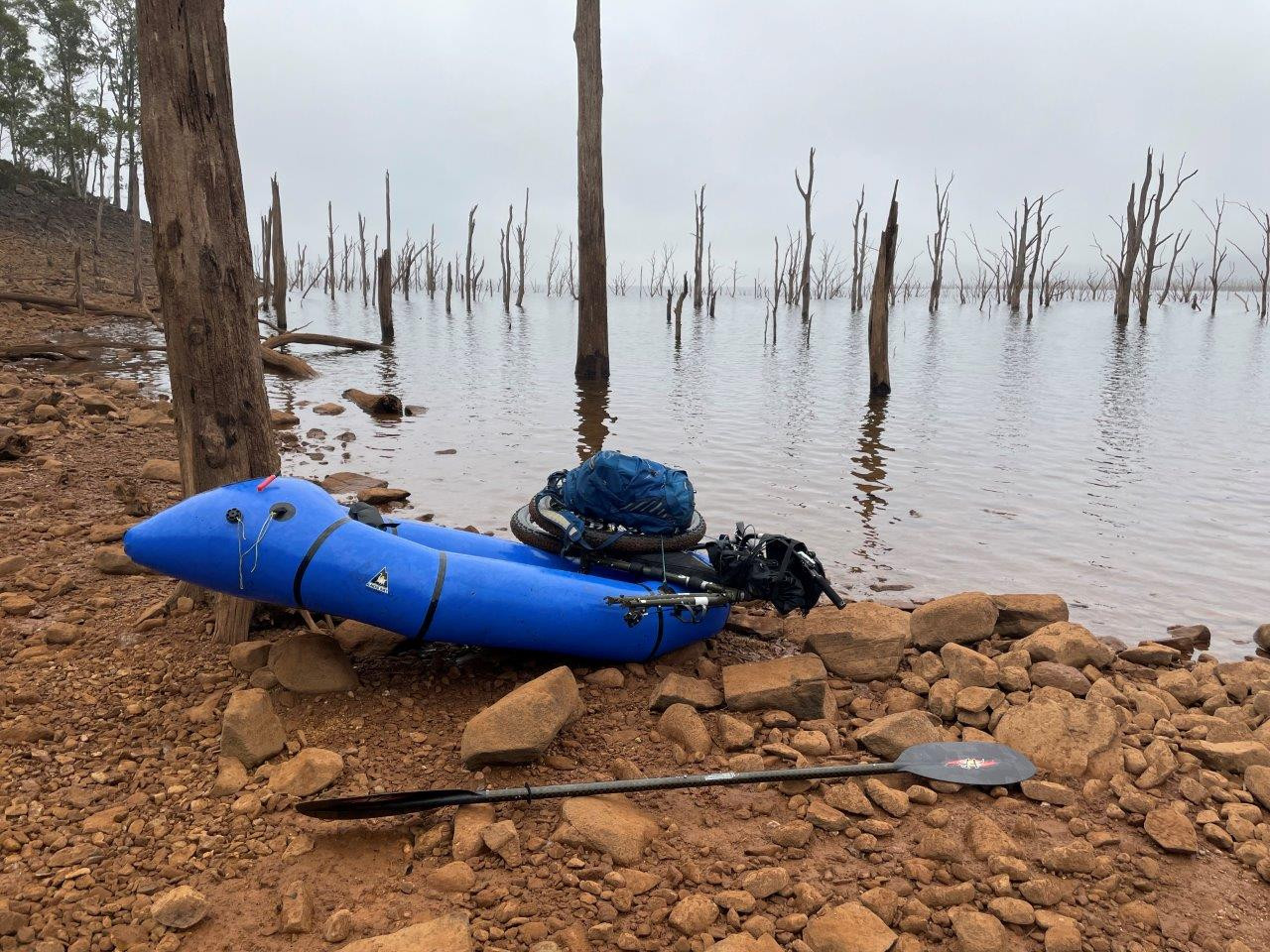 It was both very eerie and very enjoyable paddling out through the dead trees and into the lake, especially when I got to one point and could hear what I swore was a motorbike or quad bike on the shoreline behind me which made no sense and in the end I had to conclude it was just the lake creating strange echoes.

I had planned the trip on a day with predicted very calm winds and then all those winds were forecast to be easterly's which put them right behind me, and that's exactly what happened leading to a very easy paddle up to and then across the Guelph Narrows and to my destination on the other side which is an easy to spot shed from where I knew a track led up onto Harbacks Road and out onto the Lyell Highway. 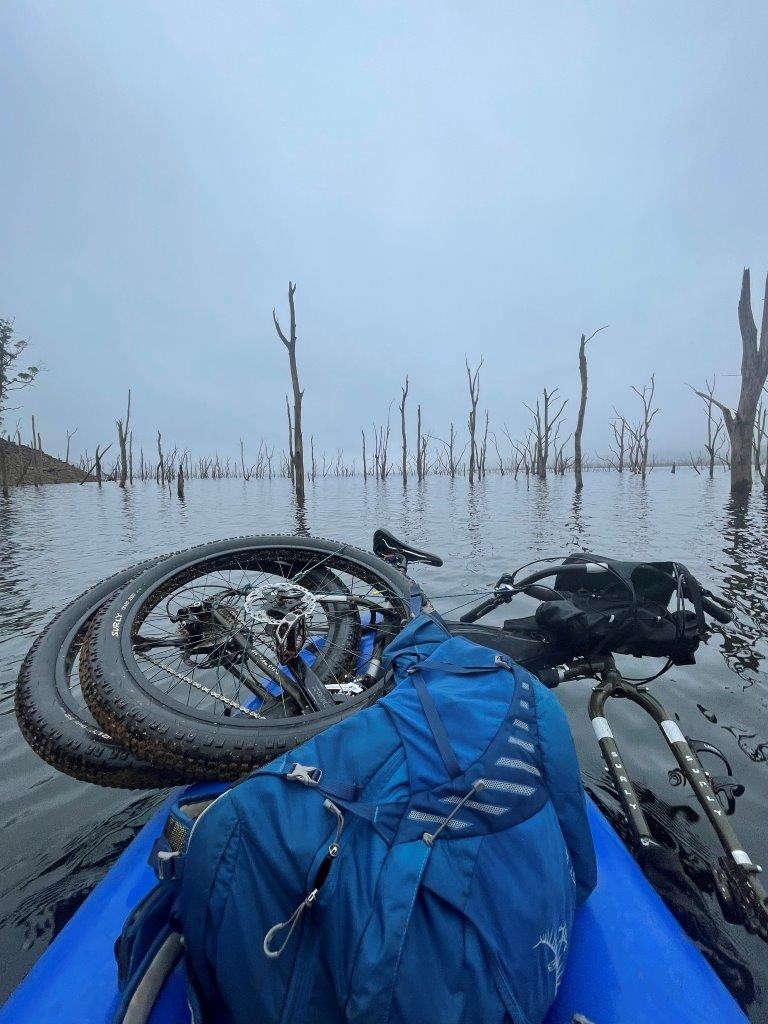 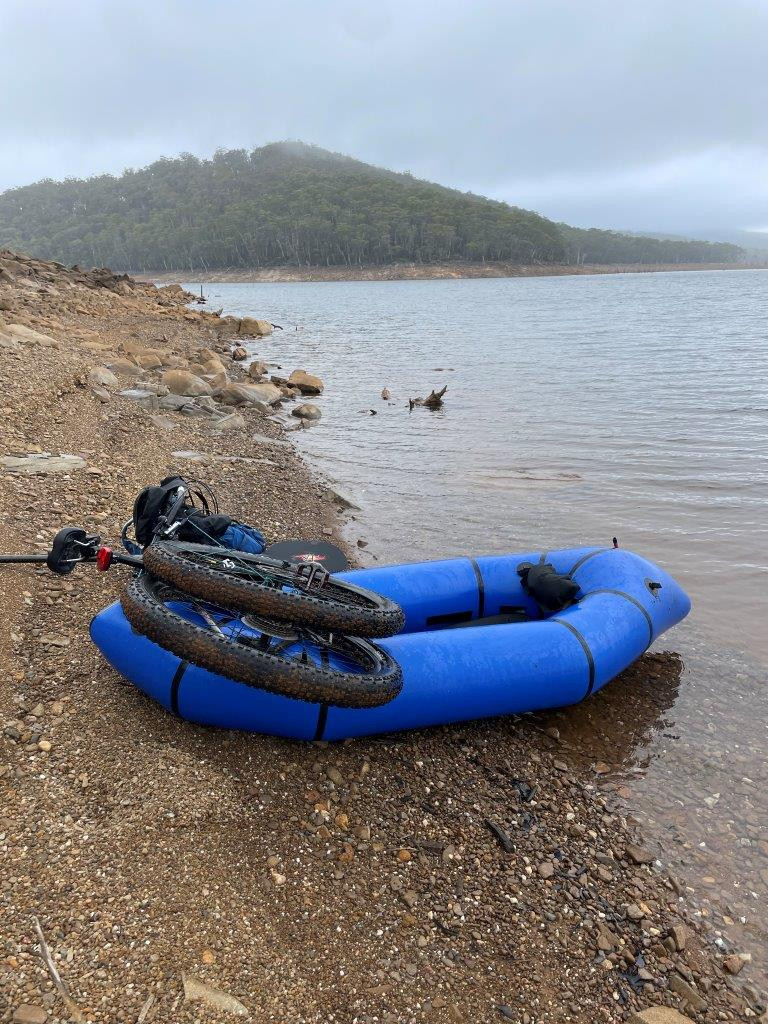 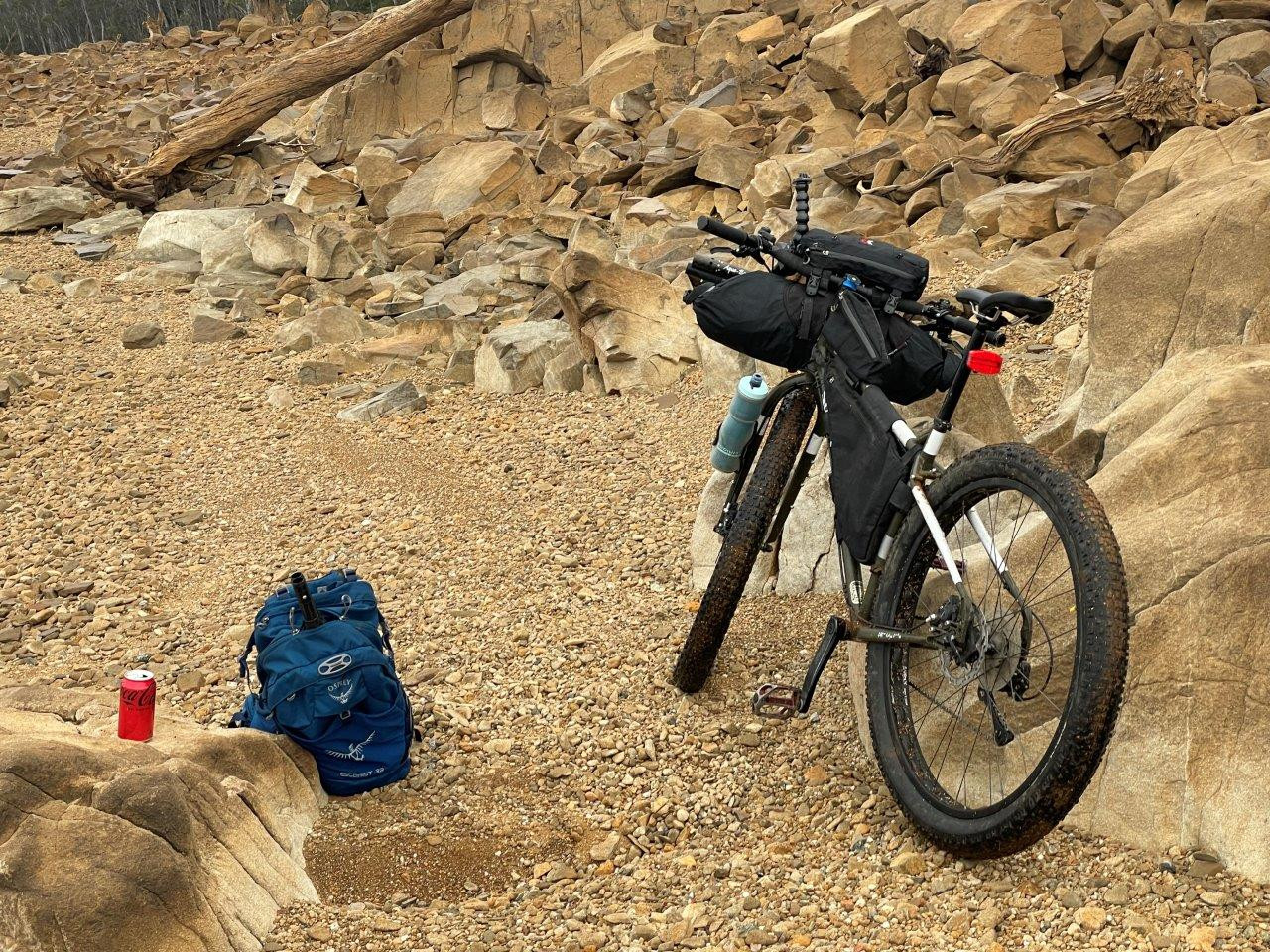 The ride out to the highway was much more enjoyable than I expected.  I expected a mainly uphill grind, but other than the first steep push up to the gravel road from the hut, the rest of the ride was all very ridable and just plain beautiful ... 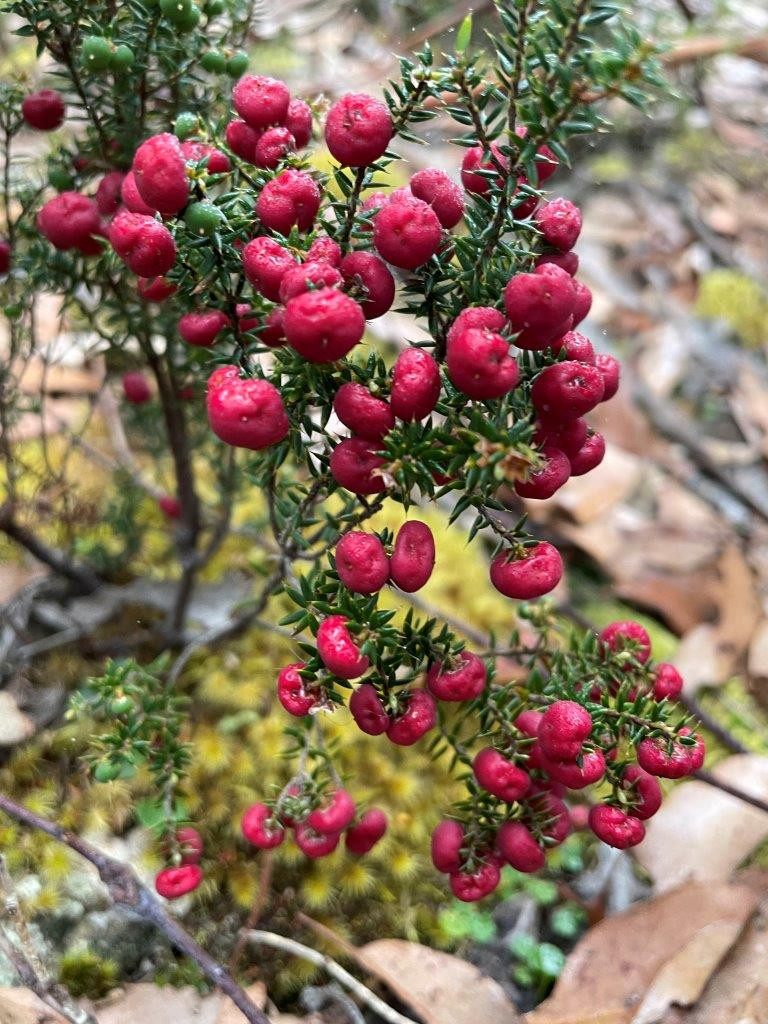 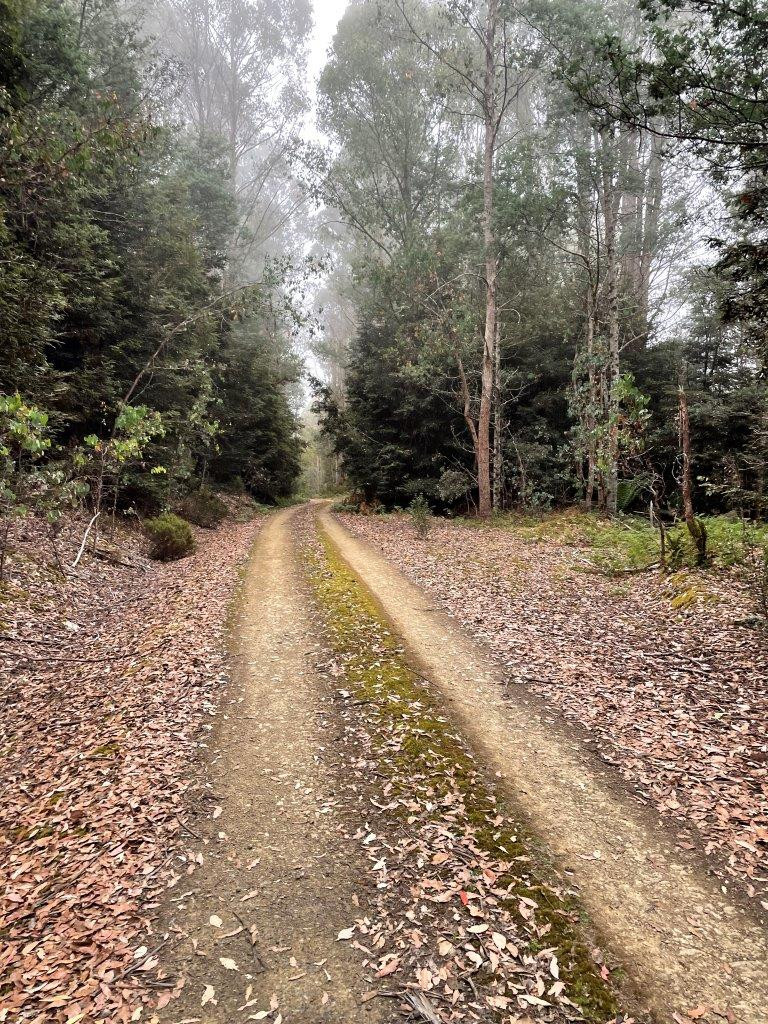 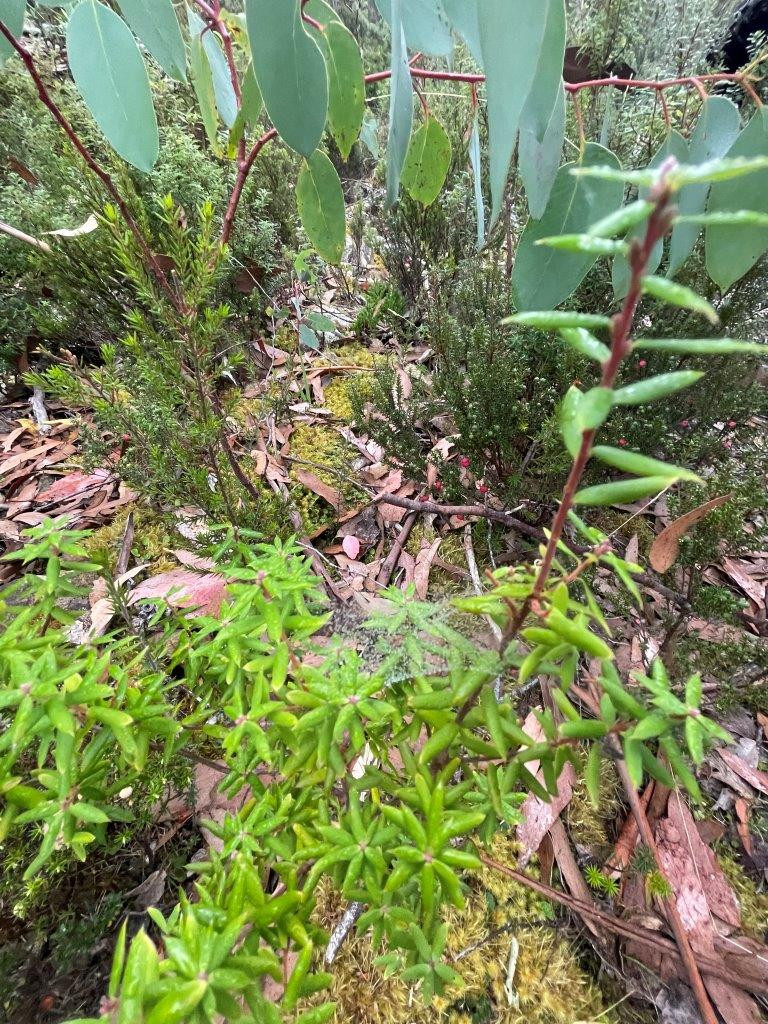 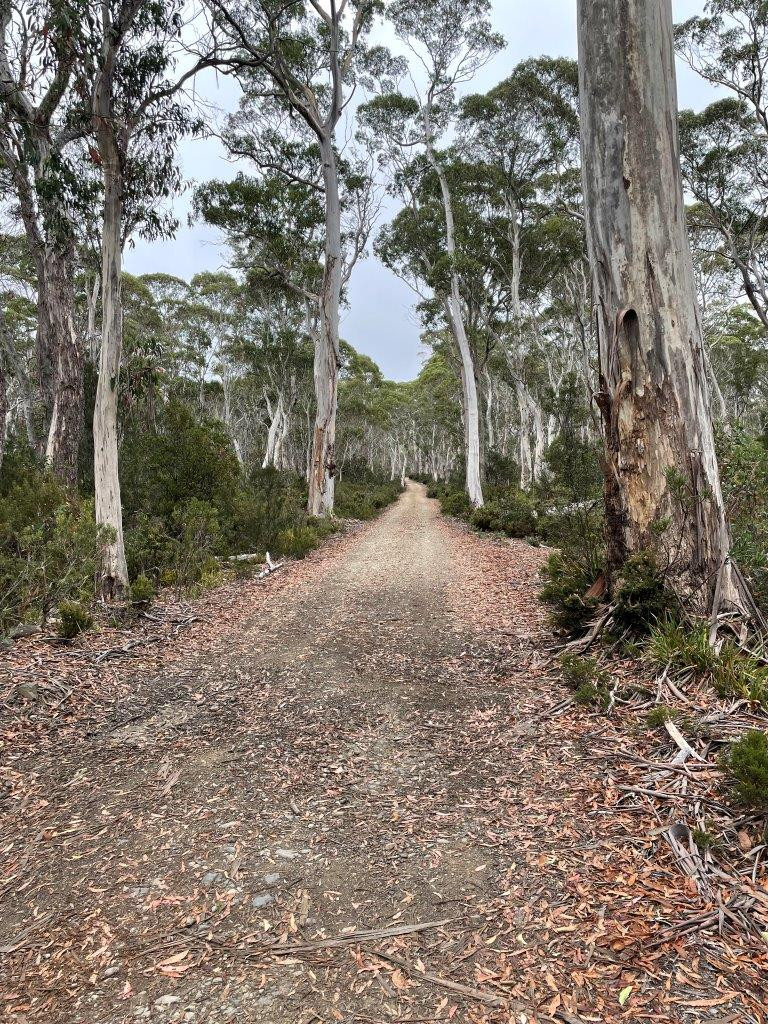 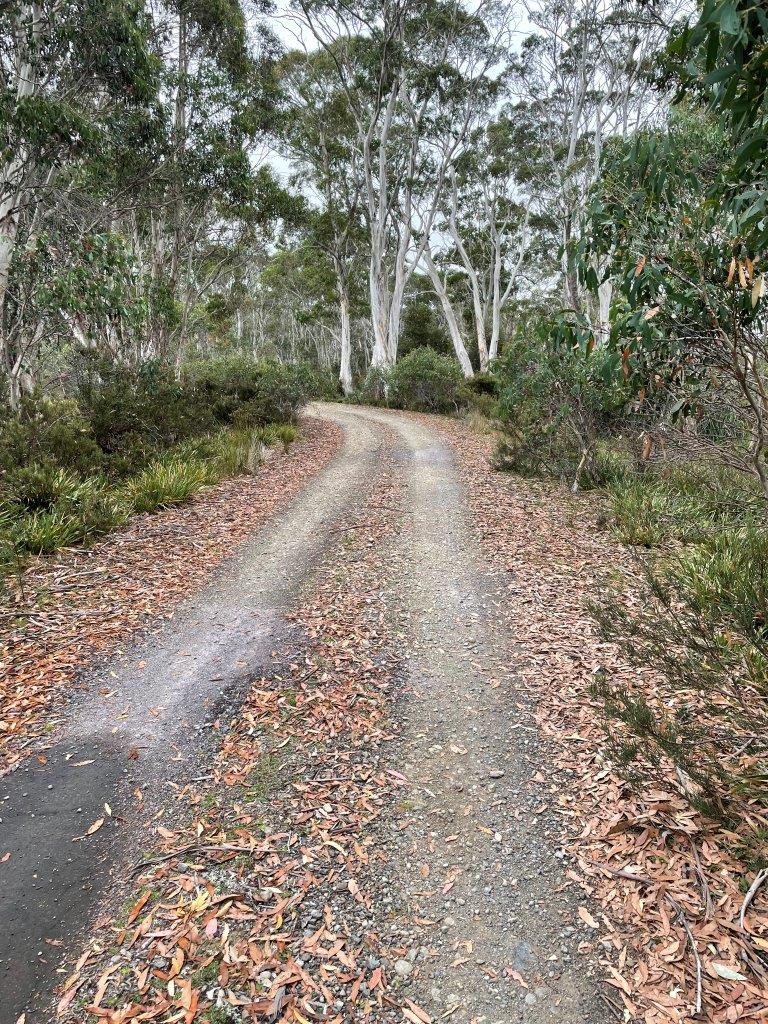 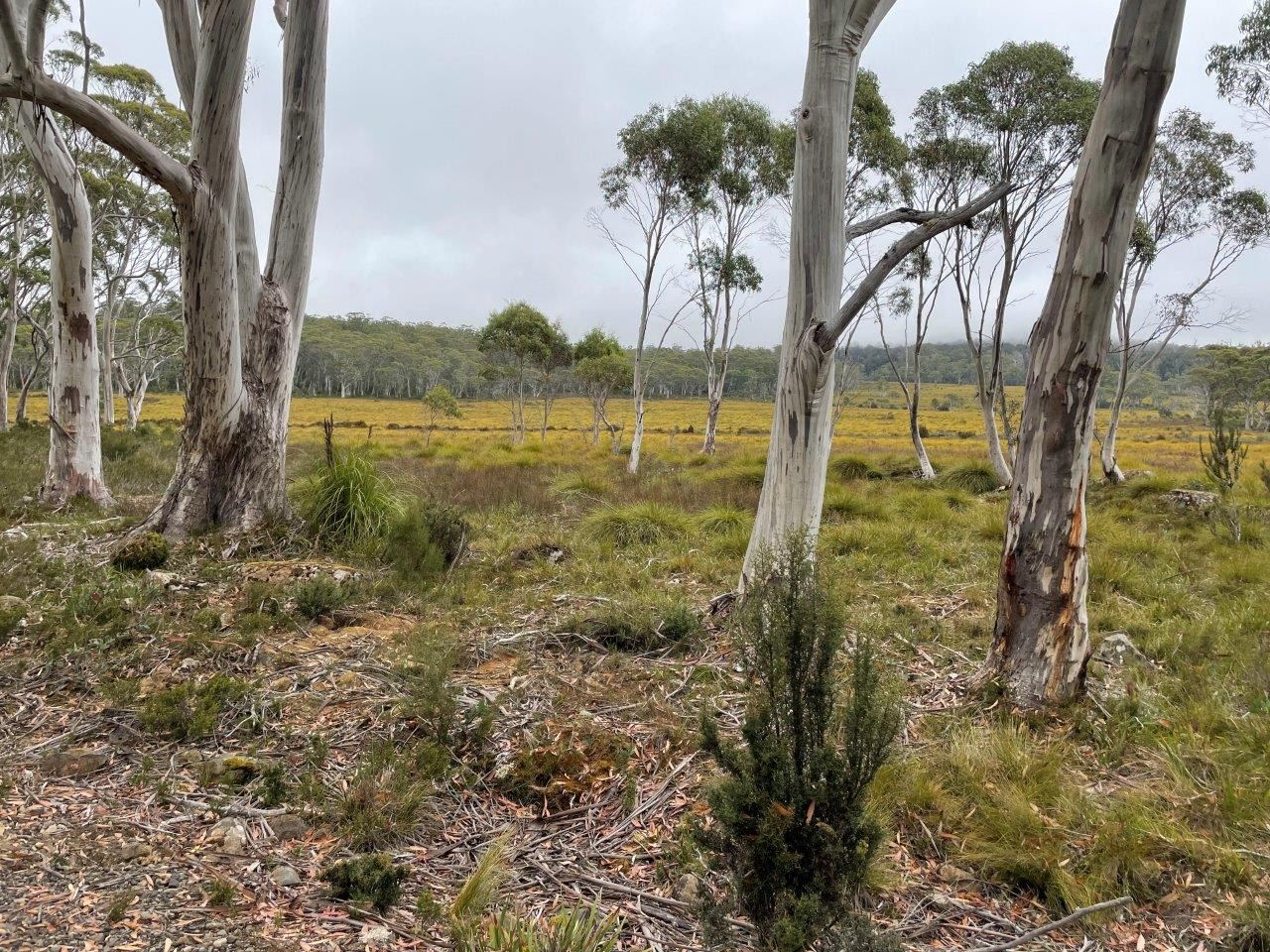 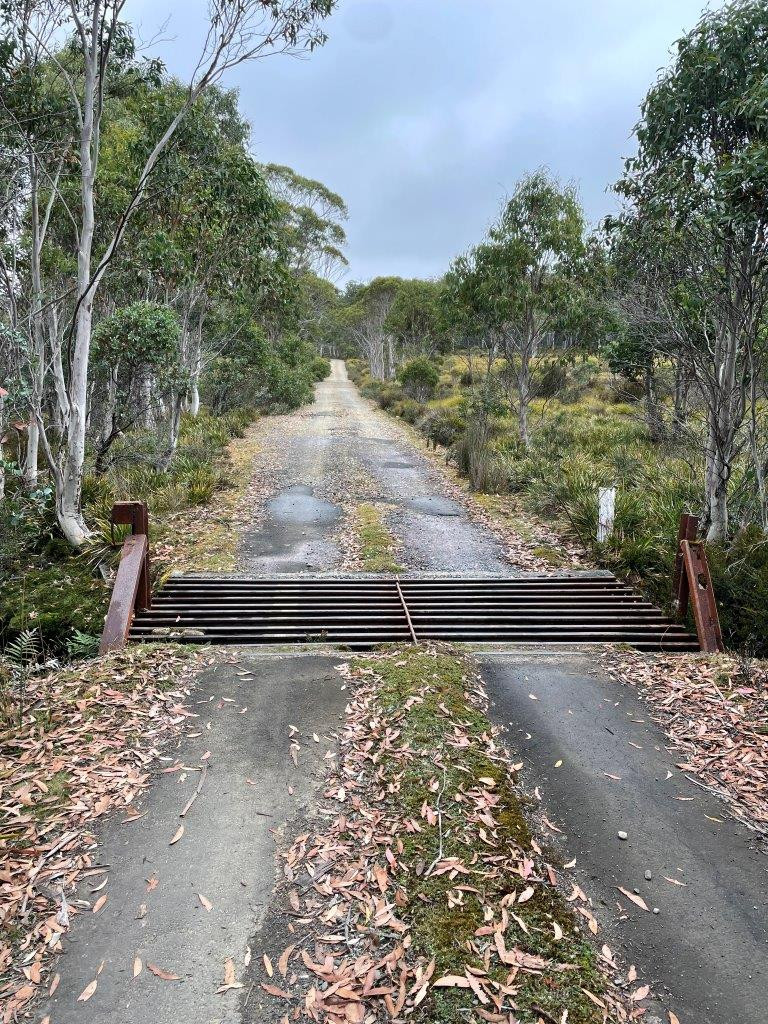 The same couldn't be said about the ride from the end of Harbacks Road to Derwent Bridge along the Lyell Highway where many impatient motorists went by at far too high a speed for my comfort, but fortunately it is only a short section and I nevery really felt threatened - I just wasn't able to relax like I could on the rest of the ride.

With that said I was very happy to pull into the cafe at Derwent Bridge, just after 11.30am and well ahead of my expected schedule, for what was supposed to be an early coffee and hot lunch ... except the place was packed.  Every table was taken and after taking my coffee order, the guy behind the bar told me it would be about 20 minutes before it was ready, at which point I decided that a quiet lunch down by the lake would be much preferable to this, so for the second time in a morning I headed off without my planned coffee.

After a quick backtrack (1.5kms) along the highway, I headed to what would be the second big unknown for the day - the re-crossing of the River Derwent at a concrete weir and then the plan was to make my way around the shoreline for about two kilometres, avoiding a very steep up and down track under the powerlines, before rejoining the track on the other side of the lake.  This was the last 'unknown' section of the trail. 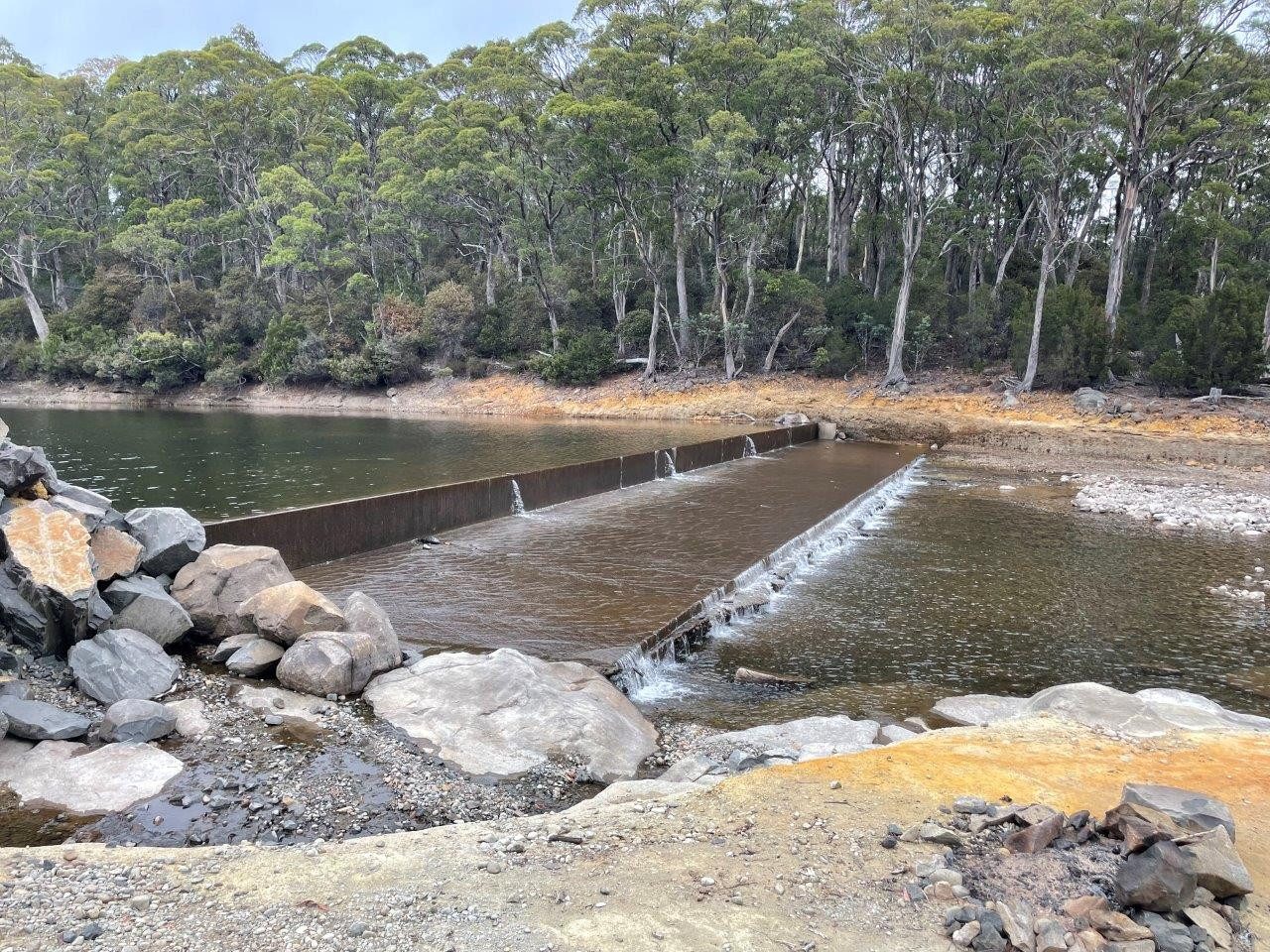 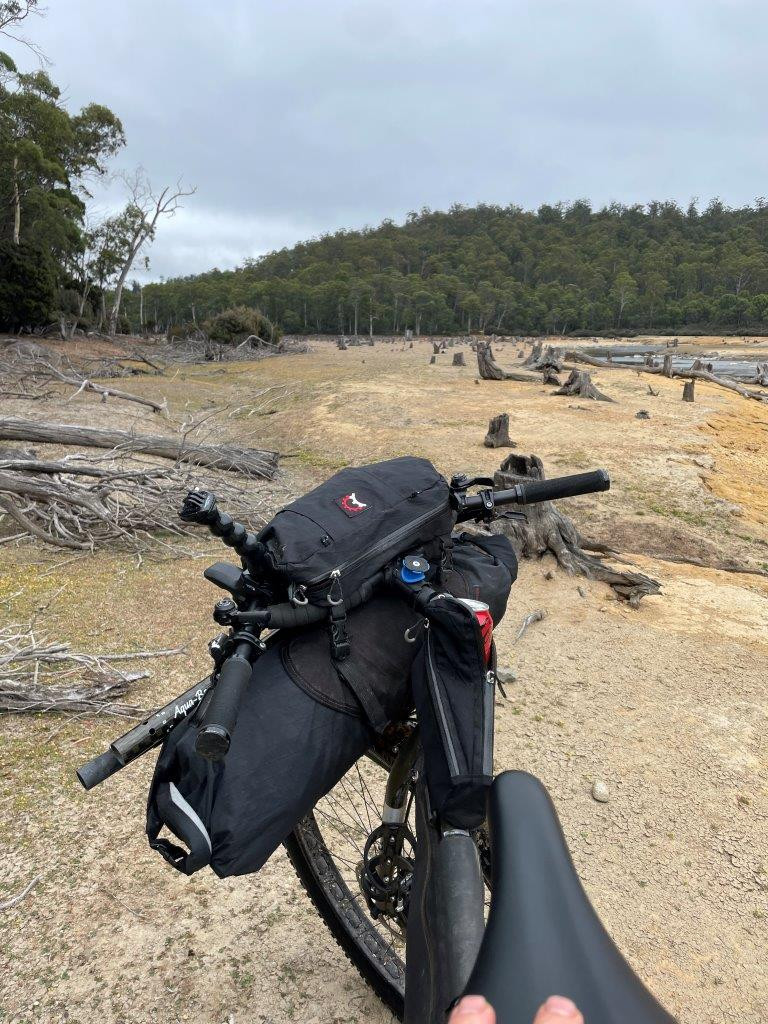 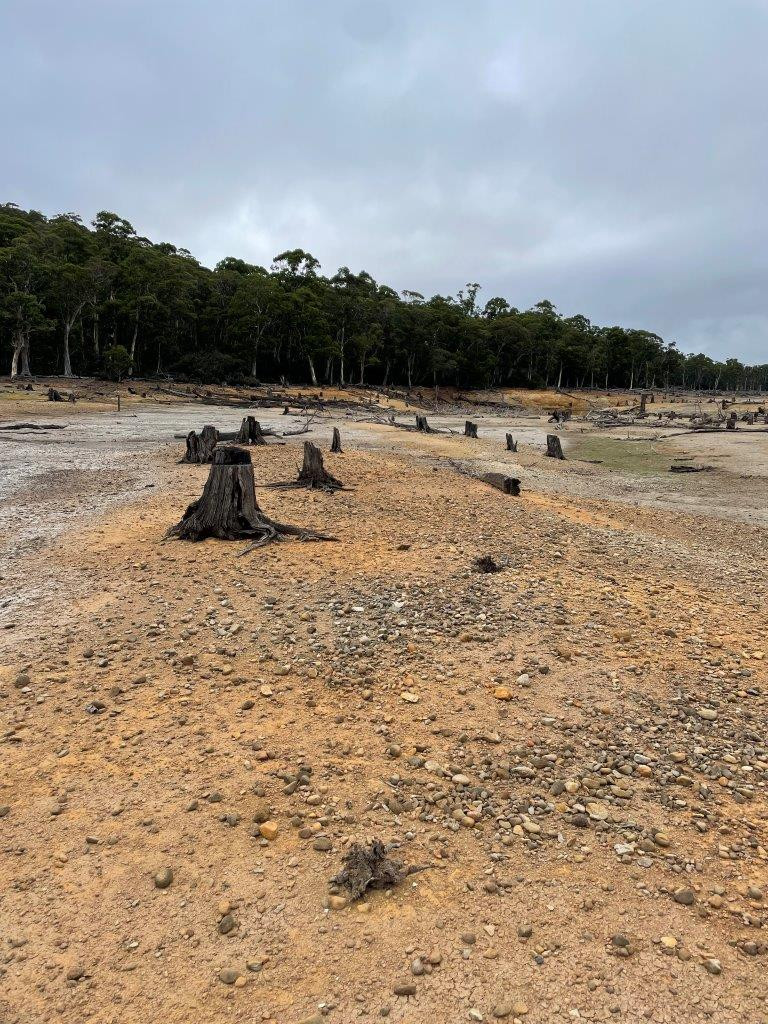 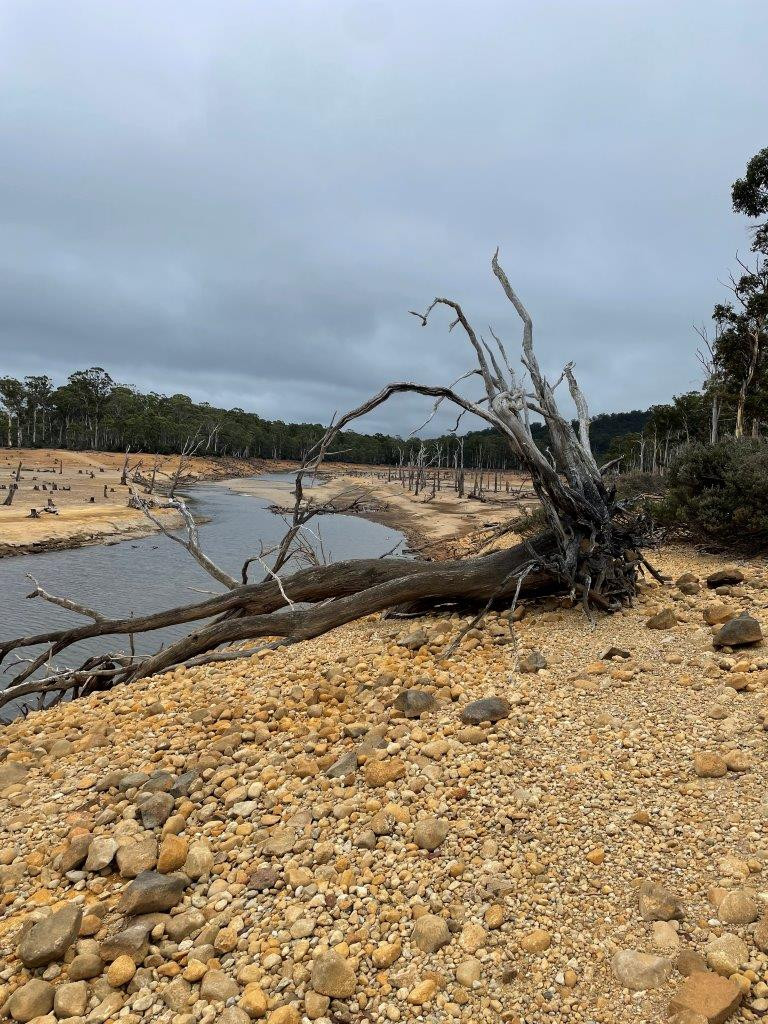 Turns out I needn't have been too concerned.  The weir crossing was a complete doddle (though note how low the water was in the photo) and I just cycled across without even getting my feet wet.  The next couple of kilometres were a mix of hard baked clay with an assortment of rocky coastlines and soft boggy sections.  I just picked what looked to be the best line and managed to ride about 70-80% of it, and before I knew it I started to see quad bike tracks in front of me and then a power pole which brought me back onto the track which I knew.

From there it was a known track back to the start.  I still managed to take one or two wrong turns and the track seemed very different, and rougher, in places to when I had last ridden in back in 2011, but I still made it through and just over 6 hours and 50kms after leaving, I found myself rolling back up to my car very, very ready to enjoy that lunch I had been carting around in my backpack for all that time. 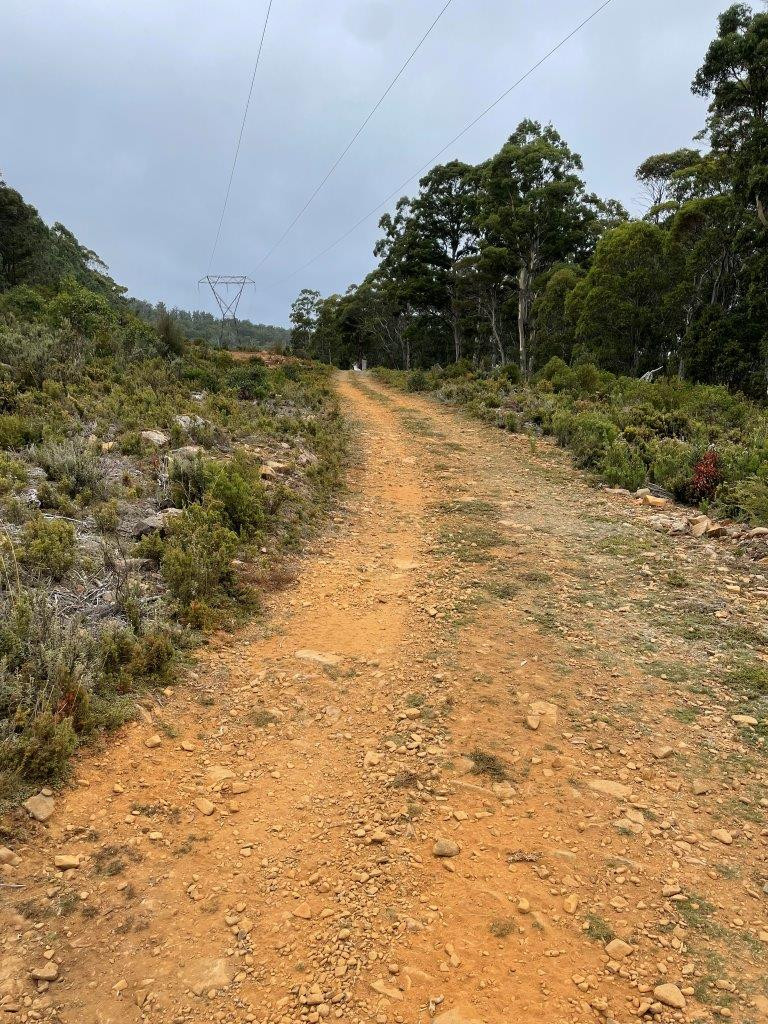 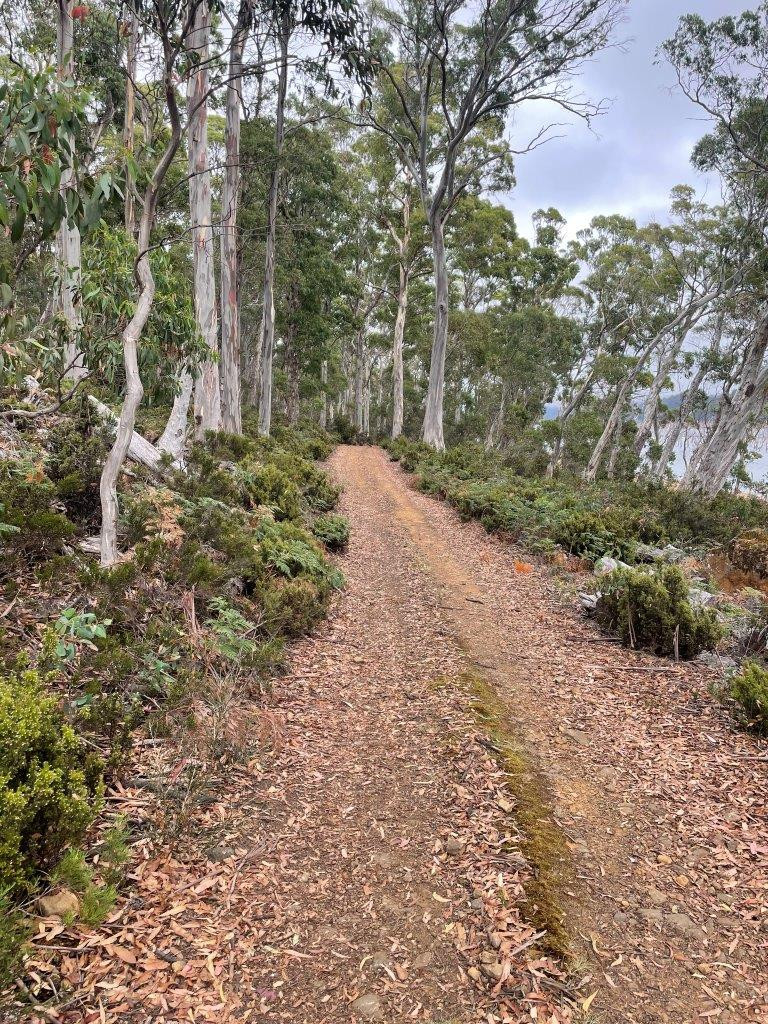 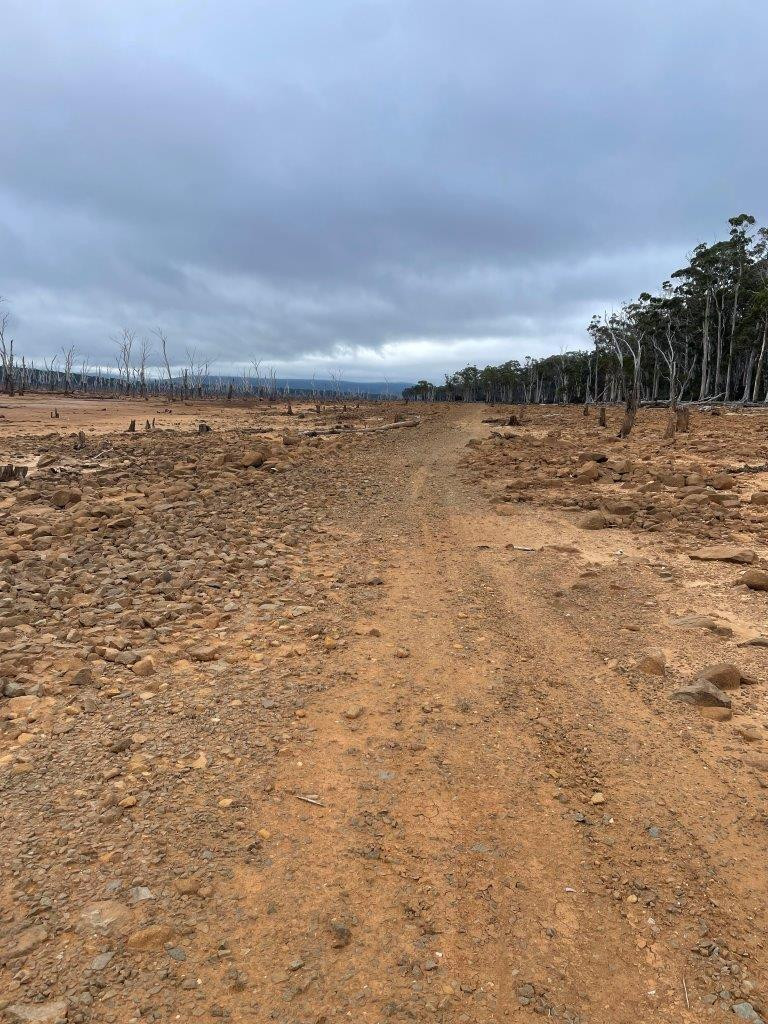 This really was a great little trip and I would happily recommend it to anyone with the experience and knowledge to feel safe riding in a remote environment.  It was certainly a lot more enjoyable than just doing an out and back trip along the eastern shore of the lack,  but at the same time I wouldn't recommend this to everyone as this is an area that if things go wrong, you could find yourself in quite some trouble.

But then that's why it's an adventure right.

You can view my strava link of this ride here.